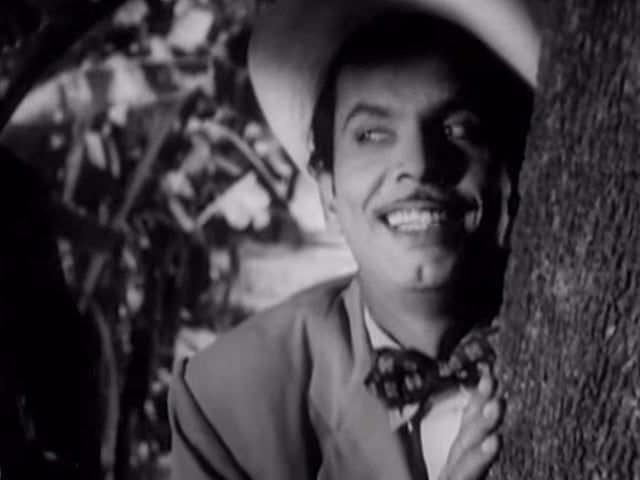 Johnny Walker in a still from Aar Paar

New Delhi: Twitter was flooded with fond memories of comedian Johnny Walker on July 29, the actor's 12th death anniversary. He would have been 89 this November.

Born Badruddin Jamaluddin Kazi, Johnny Walker blazed a trail for several comedians who were to make it big in the world of Bollywood comedy later. He was especially adept at playing a drunk on screen - even though he was a teetotaler in real life - and was, in fact, cast as a drunk in his first notable role in 1951's Baazi.

The moniker Johnny Walker was bestowed on him by actor-director Guru Dutt with who he formed a deep friendship and a hugely successful partnership on screen, appearing in all but one Guru Dutt film. In an era when star billing in song picturisations was reserved for the hero and heroine, Johnny Walker had the popular Sar Jo Tera Chakraye all to himself in Pyaasa. Apart from the acclaimed Pyaasa, Johnny Walker's films of note included CID, Mere Mehboob, Naya Daur, Chori Chori and Madhumati.On Twitter, Bollywood celebrities remembered the late actor with affection and respect. Rishi Kapoor listed snooker as one of his talents:

Johnnie Walker Sahab. Remembering him on his 12th death anniversary. A good actor,human being and a snooker player pic.twitter.com/So3OxSQj3g

Today is the death anniversary of the great comic Johnny Walker ji. Oh how I wish I could have had the honour to work with him. #masterclass

Remembering the legendary #JohnnyWalker today. One of the pioneers of comedy in #bollywood & certainly one of the most beloved!

Remembering the great legend #JohnnyWalker Sir today on his 12th death anniversary ....u still live in our hearts !!

Today is the 12th death anniversary of JOHNNY WALKER the most dignified comic actor of all time.

Johnny Walker was last seen in a cameo role in Chachi 420, as Kamal Haasan's make-up artist friend. The actor died in 2003 at the age of 77.