"Thank you everyone for all the love. Miss my parents more," Sonu Sood tweeted 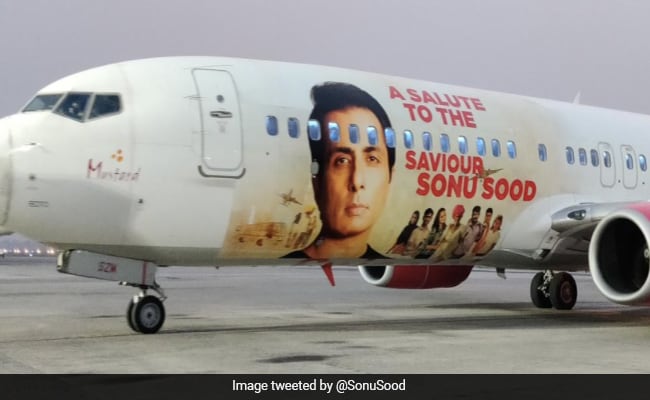 Actor Sonu Sood remembered his parents in an emotional tweet in response to Indian airline SpiceJet's tribute to the actor. Sonu Sood, best known for playing antagonists in films, was hailed as a hero on social media for his successful efforts to send thousands of stranded migrants to their home villages during the lockdown and for flying back home stranded Indian students during the pandemic. As a tribute to the real life hero, SpiceJet dedicated a special aircraft to Sonu Sood, which reads: "A salute to the saviour." In response to the airline's gesture, Sonu Sood wrote in a tweet: "Remember coming from Moga to Mumbai on an unreserved ticket. Thank you everyone for all the love. Miss my parents more."

Remember coming from Moga to Mumbai on an unreserved ticket.
Thank you everyone for all the love. Miss my parents more. @flyspicejetpic.twitter.com/MYipwwYReG

Sonu Sood, who moved to Mumbai from Punjab with dreams of becoming an actor, lost his mother Saroj Sood in 2007. The actor's father Shakti Sood died in 2016. On his mother's death anniversary last year, Sonu Sood posted this throwback memory along with a heart-wrenching note: "Wish I could sit in a theatre with you and watch my film. The applause and whistles would have justified the time I had spent away from you during my struggling days."

During the lockdown, Sonu Sood became a hero among stranded migrants for his efforts to send them back home. He had even offered his hotel in Mumbai for healthcare professionals to stay in. Sonu Sood had also launched a toll free helpline for migrants so that those in need of assistance could share their details over a phone call.