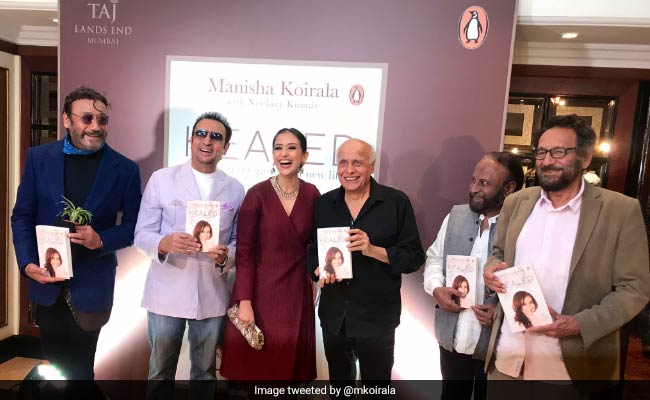 Actress Manisha Koirala's autobiography, titled Healed: How Cancer Gave Me A New Life, was launched in Mumbai on Tuesday. The book launch event was attended by Manisha's close friends from the film industry and family members. Anupam Kher, who co-starred with Manisha in her debut film Saudagar, was also present at the event. Sharing glimpses from the event last night, Anupam Kher wrote on Instgaram: “Today at Manisha Koirala's book launch I remembered a heroic gesture of my brother Raju Kher (a cancer survivor) just before his surgery and how Manisha Koirala is more beautiful now than at the time of her debut film Saudagar. Because ‘LIFE' has happened to her. Her book Healed is about courage and the spirit of survival. Please buy your copy.” Jackie Shroff, who featured in Vidhu Vinod Chopra's 1942: A Love Story along with Manisha Koirala, was also part of the book launch event.

At Manisha Koirala's book launch I remembered a heroic gesture of my brother @RajuKher1 (cancer survivor) just before his surgery & how @mkoirala is looks more beautiful now. Because ‘LIFE' has happened to her. Her book #Healed is about Courage & the Spirit of Survival. #BuyItpic.twitter.com/gWN2gjNtLT

Born into the prominent Koirala family in Nepal, Manisha Koirala made her Bollywood debut with Saudagar in 1991. She is best known for her perfomances in Akele Hum Akele Tum, Bombay, Khamoshi: The Musical, Dil Se, Mann, Lajja and Company. She took a break from acting in 2012 (after she was diagnosed with cancer) and returned five years later with the coming-of-age drama Dear Maya.

On the work front, Manisha Koirala was last seen in Sanju, where she played the role of Sanjay Dutt's mother Nargis Dutt. She was also seen in Netflix anthology Lust Stories. She is also filming for the Hindi remake of Prasthaanam, which also stars Sanjay Dutt and Jackie Shroff.