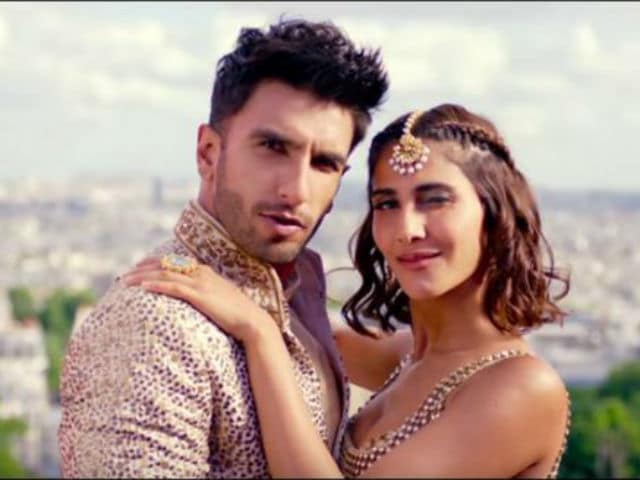 New Delhi: Brace yourselves as the quintessential Bollywood wedding song is here. The new track from Ranveer Singh and Vaani Kapoor' Befikre-- Khulke Dulke has all the ingredients of the 'modern' big fat Indian wedding. The heroine is dressed in a gold lehenga while the hero makes a grand entry riding a white horse wearing? A heavily embellished sherwani, of course. 'Only English' baaratis will do at this wedding so we have Caucasian back-up dancers dressed in colourful bikinis, accesorised with heavy jewellery. Also how can you forget Befikre's signature Parisian touch? Hence Basilique du Sacre-Coeur in the background.

Composed by music directors Vishal-Shekhar, the song has been sung by Punjabi singer Gippy Grewal and Harshdeep Kaur with backing vocals from Vishal Dadlani, Kunal Ganjawala and Ankur Tewari. Ranveer and Vaani dance their heart out on the tunes of choreographer Vaibhavi Merchant. And no Ranveer, we didn't doubt that there wouldn't be a Punjabi number in an Aditya Chopra film.

Did you really think, an Aditya Chopra film wouldn't have a full on Punjabi gaana? #KhulkeDulke ;) @befikrethefilmhttps://t.co/cbk0wpKqGG

We can't switch off our Punjabi mode, even in Paris! So get ready to dance #Befikre! #KhulkeDulke@BefikreTheFilmhttps://t.co/PaTBdy19sR

Penned by Jaideep Sahni, Khulke Dhulke is heavy on Punjabi peppered with English phrases like 'Have some fun'.


Most importantly, the song marks the return of Ranveer and Vaani's kissing which was absent in the last song You and Mereleased a week ago. Sung by Nikhil D'Souza and Rachel Varghese, You And Me was a fun number targeting the youth while Khulke Dhulke will be 'the song' for this wedding season.

Promoted
Listen to the latest songs, only on JioSaavn.com
Ranveer and Vaani have been busy promoting the film. The last they were seen in Bradford.

Bradford! I'm in your city on Nov 20 ! Hope to see you all there.. #BeBefikreinBradford