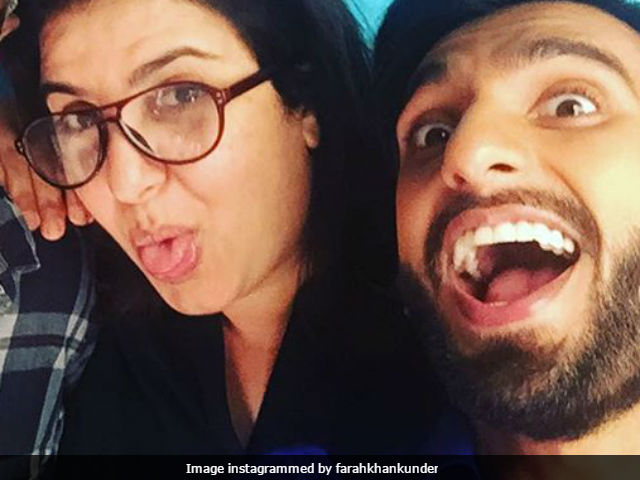 Ranveer and Farah were funny as always. (Image courtesy: farahkhankunder )

New Delhi: After posting a hilarious video message for Alia Bhatt, Ranveer Singh has now teamed up with filmmaker Farah Khan for a Khoon Bhari Maang gig. In a hilarious video posted by the 31-year-old actor on Instagram, the duo can be seen in their crazy filmy guise dancing to the famous song from Rekha's film Khoon Bhari Maang. Farah Khan and Ranveer Singh were shooting for a commercial when they made this video. The 52-year-director also shared a photograph with the Dil Dhadkne Do actor where both of them are seen wearing colourful crowns with funky eyewear. Farah, who was apparently not keeping well, wrote that the actor cheered her up in sickness.

The coolest princess in town @ranveersingh cheers a sick me at the #H&S shoot!!

Promoted
Listen to the latest songs, only on JioSaavn.com
Meanwhile, Ranveer is also busy shooting for Sanjay Leela Bhansali's historical drama film Padmavati, which features Deepika Padukone and Shahid Kapoor in the lead roles. The Bajirao Mastani actor was last seen in Aditya Chopra's Befikre opposite Vaani Kapoor. Ranveer Singh is also collaborating with director Zoya Akhtar for the second time. He will be seen in her next venture Gully Boy opposite Alia Bhatt.

Filmmaker-choreographer Farah Khan recently featured with Tennis star Sania Mirza on Karan Johar's chat show Koffee With Karan. Both of them spoke about how their friendship started and how they have grown as friends now. Farah Khan's last directorial venture was the 2015 movie Happy New Year. Her next project is likely to be about girl power.