Rani Mukerji At The Great Wall Of China. But She's No Mere Tourist

Rani Mukerji's Hichki is also slated to release in Taiwan and Hong Kong on November 2 and 8, respectively 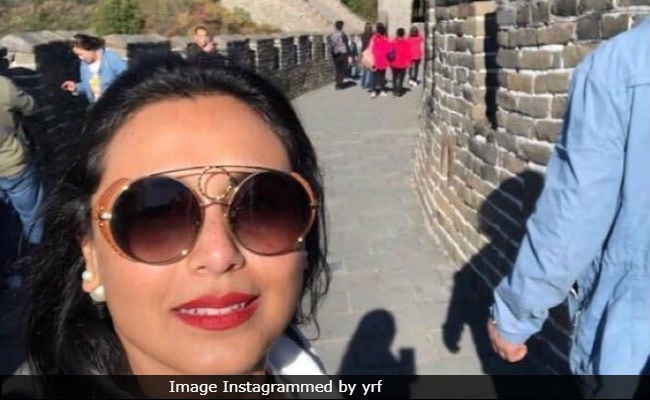 Actress Rani Mukerji is all set for the release of her film Hichki in China and she is currently busy with the film's promotional duties. We got a glimpse of Rani's China diaries through Yash Raj Films' official Instagram account. On Tuesday, YRF shared a picture, in which Rani can be seen posing in front of the Great Wall Of China. The post was captioned: "Whattay sight." Hichki is slated to release in China on October 12. Directed by Siddharth P Malhotra, Hichki, showcases the story of a determined teacher named Naina Mathur (played by Rani Mukerji), who suffers from Tourette syndrome. The film also touches upon the theme of educational equality through Right To Education.

Rani Mukerji might be a social media recluse but thanks to YRF's Instagram account, we got a glimpse of more pictures from Rani's promotional diaries in China. Check out the picture here:

Besides China, Hichki has also released in Russia and Kazakhstan. That's not it, YRF's official Instagram account shared the news that Hichki is also stated to release in Taiwan and Hong Kong on November 2 and 8, respectively. Other than that, Hichki was also screened at the Shanghai International Film Festival, as a part of the Belt and Road Week of the festival in June this year.

The much-appreciated #Hichki will be screened at the Belt and Road Film Week of Shanghai International Film Festival in China... Screening takes place on 16 June 2018 [festival's opening day]... Director Siddharth Malhotra will interact with members of audience, post screening.

Hichki is an adaptation of Brad Cohen's autobiography Front Of The Class: How Tourette Syndrome Made Me The Teacher I Never Had. The film also stars Supriya Pilgaonkar, Sachin Pilgaonkar, Harsh Mayar, Shivkumar Subramaniam, Neeraj Kabi and it marked the Bollywood comeback of Rani Mukerji on silver screen. Rani was last seen in the 204 film Mardaani.

Over the last few years, China has emerged as a huge market for Bollywood films. Other than Hichki, films such as PadMan, Hindi Medium, Toilet: Ek Prem Katha, Secret Superstar and Bajrani Bhaijaan among others premiered in China and performed exceptionally well.