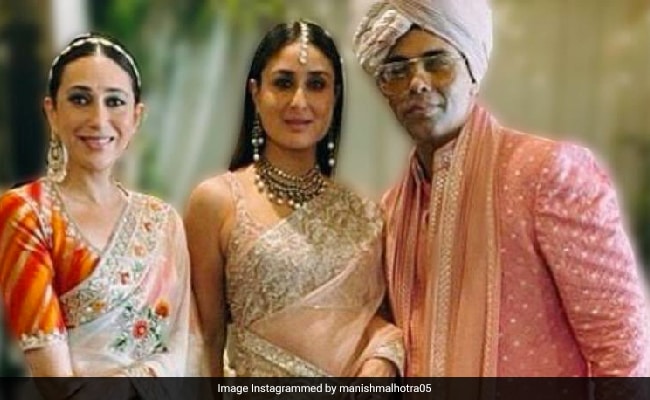 Ranbir Kapoor and Alia Bhatt's wedding guest list included two baraatis and a ladkiwale who have been best friends since way before Ranbir and Alia began dating. Designer Manish Malhotra, who didn't appear to be at the wedding, posted an inside picture of Ranbir's cousins Kareena and Karisma Kapoor and Alia's mentor Karan Johar. "My all time favourites forever," Manish Malhotra wrote. KJo and the Kapoor sisters are not just friends but longtime collaborators as well; he directed Kareena in one of her best-known films, Kabhie Khushie Kabhie Gham. Kareena and Karisma are the daughters of Randhir Kapoor, elder brother of Ranbir's late father Rishi Kapoor. Karan Johar launched Alia Bhatt in Student Of The Year and has produced several films she's been in including the upcoming Brahmastra.

Kareena Kapoor wore a Manish Malhotra saree in pink and gold for the wedding ceremony.

The white and silver lehenga Kareena wore to Wednesday's mehendi was also designed by Manish Malhotra.

Ranbir Kapoor and Alia Bhatt got married in a private ceremony on Friday at home in Vastu apartments, where they live in Mumbai. Only close family and friends were invited – apart from Kareena, Karisma and Karan Johar, Brahmastra director Ayan Mukerji attended as did Akash Ambani and his wife Shloka. Navya Naveli Nanda was there with her parents Shweta Bachchan and Nikhil Nanda who is Ranbir's cousin.

Alia Bhatt and Ranbir Kapoor began dating in 2018 after being cast together in Brahmastra, which is a trilogy and co-stars Amitabh Bachchan, Nagarjuna and Mouni Roy. The first film of the three-part series releases this September.