Kunal Kohli's last project was Phir Se, which never saw the light of the day 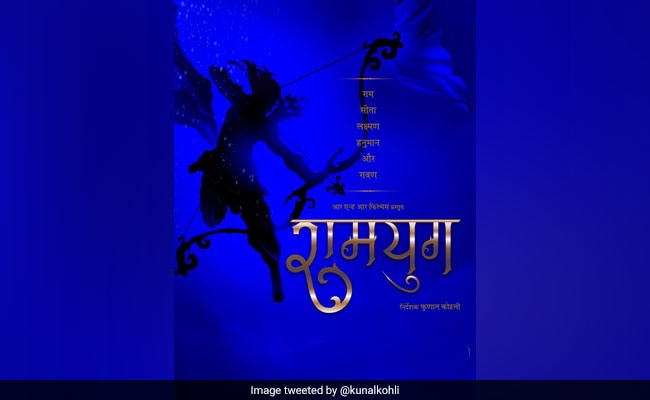 New Delhi: Filmmaker Kunal Kohli announced his next film titled RamYug, which is the adaptation of epic Ramayana. In an interview to IANS Kunal Kohli said that there is nothing more "progressive" and "historic" than the Ramayana. "I think there is nothing more historic, progressive and modern than Ramayana. We think we are very modern and progressive because of the language we use and see in the films, but the thoughts and your way of life can never be outdated. They will always be modern," IANS quoted Kunal Kohli as saying. Kunal Kohli announced his next film on Twitter with the first look. "RamYug my next film. Need your Love, blessings and support," Kunal tweeted. The 47-year-old director is yet to reveal the cast of the film.

#RamYug my next film. Need your Love, blessings & support. pic.twitter.com/PBegUMKB9D

RamYug has been written by Kamlesh Panday, who has been screenwriter for films like Tezaab, Chalbaaz and Rang De! Basanti. Kamlesh Panday said that writing the film was a major "challenge." "I have always been waiting and wanting to write (a story around) Ramayana. Writing this story is a challenge because everyone knows the story and the characters. In our country, history wasn't recorded at the time and people still think it is mythology and not true, but it is our history," IANS quoted Mr Panday as saying. Kunal Kohli's is well known for films like Fanaa, Hum Tum and Mujhse Dosti Keroge!. Kunal Kohli's last film Teri Meri Kahaani featuring Priyanka Chopra and Shahid Kapoor released in 2012. He also directed Phir Se in which he played the lead role opposite Jennifer Winget. However, the film never saw the light of the day.(With IANS inputs)
Promoted
Listen to the latest songs, only on JioSaavn.com