Rambha Danced Like No One's Watching At Her Baby Shower. See Pics 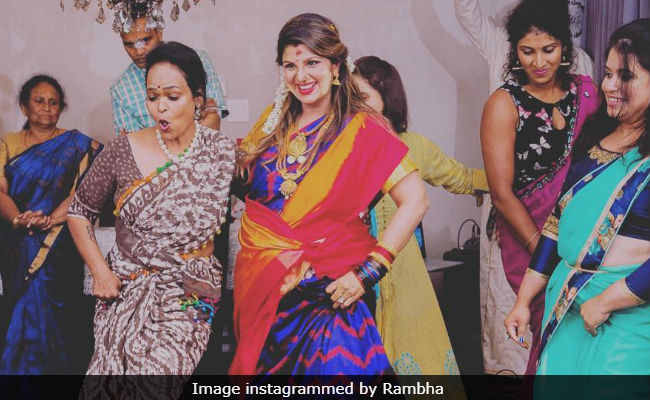 Rambha and Indrakumar with their daughters. (Image courtesy: Instagram)

Actress Rambha shared bright and beautiful pictures from her baby shower on (her unverified) Instagram page on Tuesday. In the pictures, the Gharwali Baharwali actress appeared happy surrounded by her loved ones - husband Indrakumar Pathmanathan; daughters Laanya, 7, and Sasha, 3; and other family members. Rambha danced and have loads of fun all through the ceremony as is event from the photo album she opened for her Instafam. Rambha, who is settled in Toronto with her family, looked stunning in a vibrant saree festooned with gold jewellery. But Rambha's smile was brighter than her outfit or jewellery.

Check out pictures from the ceremony:

Rambha, who has featured in films such as Judwaa and Bandhan with Salman Khan, Kyo Kii... Main Jhuth Nahin Bolta with Govinda, and Krodh co-starring Suniel Shetty, quit films after marrying businessman Indrakumar in 2010. They briefly separated in 2016 however they decided to work on their relationship and got back together.

In July, Rambha attended her Judwaa co-star Salman Khan's Da-bangg Tour in the US and she shared these back stage pictures:

Apart from Bollywood, Rambha has featured in several in regional films such as Hilter and Aa Okkati Adakku in Telugu; V.I.P and Arunachalam in Tamil; Mayilattam and Payum Puli in Malayalam; and Refugee and Dada in Bengali. She was last seen onscreen in 2011's Filmstar.

Rambha, who is shuttles between India and Canada, has also appeared on several reality shows as a judge. Her last small screen appearance was in 2017 show Kings of Comedy Juniors.