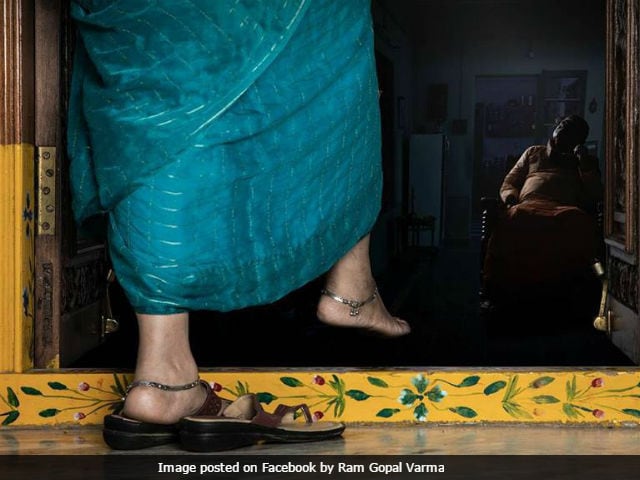 New Delhi: Filmmaker Ram Gopal Varma released the first poster of his upcoming Telugu film Lakshmi's NTR on Tuesday. The film will be based on the life of actor Junior NTR's grandfather - late Nandamuri Taraka Rama Rao or NTR. He was a popular Telugu actor-filmmaker, who later became the Chief Minister of Andhra Pradesh in 1983. Earlier in July, Ram Gopal Varma shared his desire to make a biopic on NTR. Of NTR, the 55-year-old filmmaker said, "NTR is a name to reckon with every Telugu-speaking individual. He was not just a great actor but a leader with unprecedented following. I'm very proud to direct a film on his life," reports IANS.

Ram Gopal Varma has decided to make the biopic from NTR's wife Lakshmi Parvathi's perspective. In the poster, an anonymous woman can be seen entering the house of a man, who is setting in a chair.

The filmmaker shared the poster and wrote: "One single step that created love in the heart of one man but also hatred in hundreds. But that single step also re-motivated him to once again make millions of people love him. This is the story of Lakshmi's NTR."

Of the film, he also said, "It's a love story full of hatred, jealousy, power mongering, backstabbing and above all unbelievable inter-relationship conflicts," reports IANS.


The cast and crew of the film have not yet been finalised but Ram Gopal Varma confirmed that the film will hit the screens at the end of next year.

Meanwhile, late NTR's grandson Junior NTR, who is a third generation star from the Nandamuri clan, told IANS: "I've been given the opportunity to carry forward the legacy with which people associate me. I can't escape it even if I don't like it. I take pride in carrying forward what's been given to me."

Jr NTR recently featured in Jai Lava Kusa, which has already made over Rs 90 crore at the box office in five days.