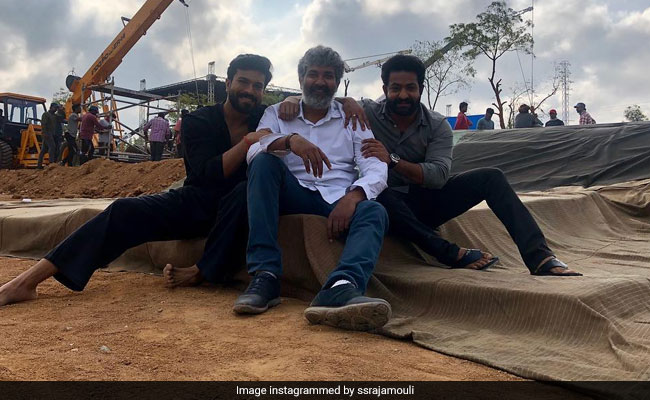 Rajamouli with Ram Charan and Jr NTR on the sets of RRR. (Image courtesy: Instagram)

Filmmaker SS Rajamouli's upcoming film, tentatively titled RRR, is reportedly getting a mega-budget action scene worth Rs 45 crore. As per a DNA report, the action sequence, which will feature the lead actors Ram Charan and Jr NTR, will be shot over a span of two-months and it will include over 2,000 artistes. A source told DNA: "The high-end action-filled segment will be filmed in a two-month-long single schedule. Both the leads will be seen fighting alongside 2,000 men in it. This will be one of the many highlights of the movie." The said scene was being planned for over six months now.

"It will be a huge set with all the splendour. Hundred foreigners are an integral part of the scene, as are both the actors and the crew," the source added.

RRR also features Bollywood actress Alia Bhatt, who earlier talked about her preparation for the film with BollywoodLife. She said: "I am prepping for it. It's tough, but I think I'll be good at it (learning Telugu for the role). I am having fun."

RRR went on floors in November 2018 and the launch was also attended by Rajamouli's Baahubali star Prabhas and antagonist Rana Daggubati. The first clap for the film was given by legendary actor Chiranjeevi, Ram Charan's father.

RRR is reportedly being made on a mega budget of Rs. 300 crore and it will release in Hindi, Tamil, Telugu and Malayalam. The film will open in cinemas in July reportedly alongside Yash Raj Films' Shamshera, starring Ranbir Kapoor.