Rajiv And Rishi Kapoor In A Throwback Gem Shared By Riddhima Kapoor Sahni. It's OK To Cry 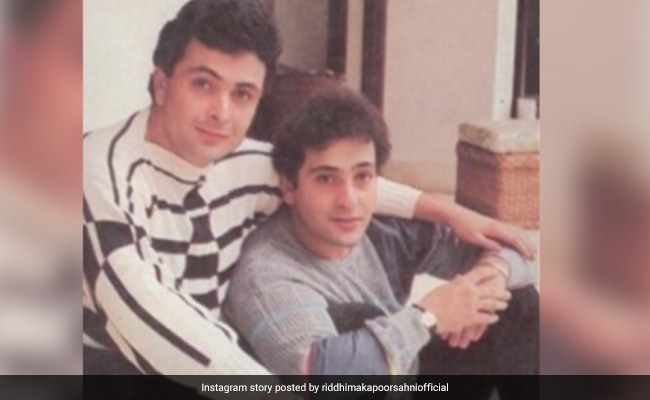 A throwback photo of Rishi and Rajiv Kapoor. (courtesy riddhimakapoorsahniofficial)

Riddhima Kapoor Sahni remembered her late father Rishi Kapoor and her late uncle Rajiv Kapoor in a priceless memory that she posted on her Instagram story. Rajiv Kapoor died following a cardiac arrest at a hospital in Chembur on Tuesday afternoon. Riddhima posted a throwback picture featuring Rishi and Rajiv Kapoor. In the throwback photograph, the brothers can be seen smiling with all their hearts. Riddima Kapoor Sahni, sharing the memory on social media, captioned the post: "Together now and forever." Rajiv Kapoor was the youngest son of the legendary Raj Kapoor, and the brother of Randhir Kapoor and Rishi Kapoor, all actors and filmmakers.

This is what Riddhima Kapoor Sahni posted: 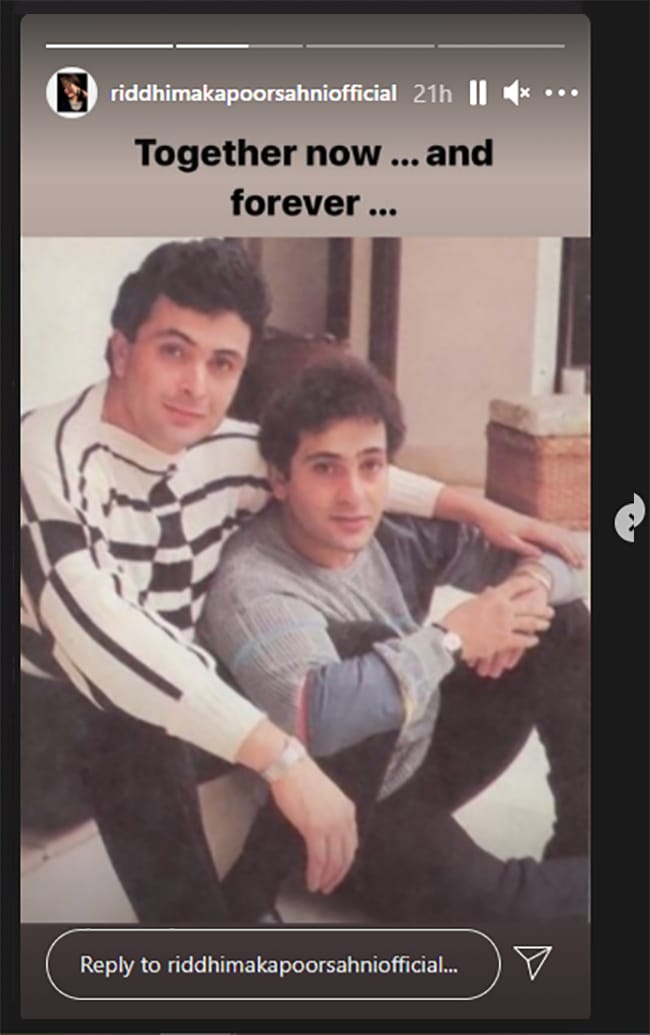 Meanwhile, Neetu Kapoor, on Wednesday morning wrote that the Kapoor family will not be hosting a prayer meet for her late brother-in-law due to the pandemic. She wrote: "Due to the current pandemic circumstances, there will be no chautha held for the late Mr Rajiv Kapoor for safety reasons. May his soul rest in peace. The entire Raj Kapoor family is a part of your grief too."

Rajiv Kapoor, who made his debut in Bollywood with the 1983 film Ek Jaan Hain Hum, was best known for the 1985 blockbuster Ram Teri Ganga Maili. He starred in films like Zimmedaar, Mera Saathi and Hum To Chale Pardes, among others. He also backed other home productions like Prem Granth and Aa Ab Laut Chalen.

Rishi Kapoor died at age of 67 in a Mumbai hospital in April last year. He was diagnosed with cancer two years ago and flew to New York for treatment. Rishi Kapoor is survived by his wife Neetu Kapoor, son Ranbir and daughter Riddhima. His last project was the 2019 film The Body. The actor had also signed a project with Deepika Padukone, which was to be a remake of Anne Hathaway and Robert De Niro's The Intern.