Rajinikanth, 'The Supreme Galaxy': Akshay Kumar's Tweet For Him Trends 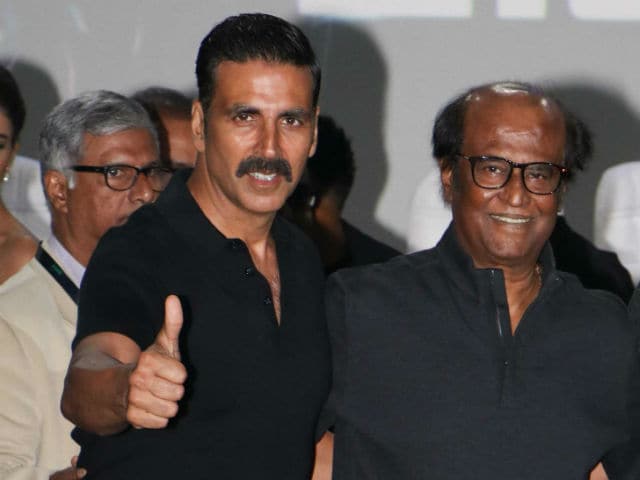 New Delhi: Rajinikanth, star of stars, celebrated his 66th birthday on Monday and his Twitter feed was flooded with wishes from Prime Minister Narendra Modi, Amitabh Bachchan and others. Shah Rukh Khan called him the 'coolest of them all' but it's this special tweet from actor Akshay Kumar that made Rajinikanth the top trend on Tuesday morning. Akshay, who will be seen with the actor in the Enthiran sequel 2.0, dubbed Rajinikanth 'the supreme galaxy to our superstars.' High praise indeed and some would say that Rajinikanth deserves much more. Akshay, 49, will be seen playing the antagonist, the deadly Dr Richard, in the Shankar-directed 2.0, which will see the return of Rajinikanth's double roles of Chitti the robot and Dr Vaseegaran.

Akshay tweeted this for the birthday boy:

When you know you're in the Presence of Greatness!! Happy Birthday Dearest @superstarrajini Sir, the Supreme Galaxy to our SuperStars pic.twitter.com/XglKUES20Z

Rajinikanth posted this thank you message on his Twitter yesterday:

To all my fans, well wishers, media & friends from the film fraternity.... many thanks for your warm wishes

He received messages from PM Modi, Big B, SRK, Rishi Kapoor and many others:

T 2469 - It is Rajnikant's birthday on Dec 12th and we wish him greater glory happiness and good helath .. pic.twitter.com/hRQRyYZ7Q6

2 the coolest & greatest of em all. Wishing u health happiness & years of entertainment for us.Happy B'Day Thalaivaa pic.twitter.com/xLwRSBbuJe

Happy Birthday Rajnikant Garu. God Bless!Remembering those days when we shot together and discussed how little we get paid at lunch time lol pic.twitter.com/F83HqX5TpX

Rajinikanth's daughter Soundarya spoke about her father's work and ethics in an interview with news agency IANS. "He is a very simple human being. He never forgot where he came from. As his children, my sister Aishwaryaa and I learnt this from him - to never forget our roots. With our dad, there are no two faces. What you see is what he is. Whether it's a fan or a producer, he treats them all the same. He has been down to earth all his life. He will never change. We, as his children, try to emulate that trait of our dad," Soundarya told IANS.

Rajinikanth, who was in and out of hospital for while a couple of years ago, has now returned to work with a vengeance. His films Kochadaiiyaan and Linga tanked at the box office but this year's Kabali,in which Rajinikanth played a Malaysia-based don, opened to record-breaking business.

Rajinikanth's 2.0 is one of next year's most-awaited films. A sequel to his 2010 blockbuster Enthiran, which released in Hindi as Robot, 2.0 co-stars Amy Jackson, apart from Akshay.

Promoted
Listen to the latest songs, only on JioSaavn.com
2.0 is expected out in October 2017.