"Our Thalaivar gets his vaccine," wrote Rajinikanth's daughter Soundarya 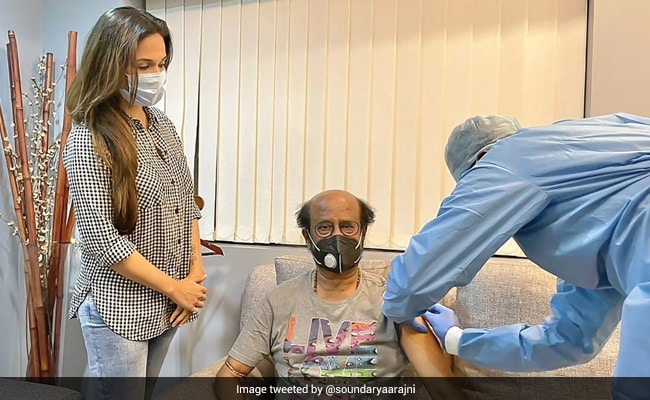 Rajinikanth, 70, got his COVID-19 vaccine shot today in Chennai, his daughter Soundarya revealed. In a tweet, Soundarya wrote: "Our Thalaivar gets his vaccine. Let us fight and win this war against Corona virus together." She shared a picture of the superstar, masked, being given his shot by a medical professional in PPE kit. It's not clear which vaccine Rajinikanth received, nor of this is his first or second dose. Many celebrities, including Rajinikanth's longtime colleague and friend Kamal Haasan, have shared posts of themselves receiving their vaccinations. India is currently battling a brutal second COVID wave compounded by several shortages including of vaccines - this despite the government recently expanding its vaccination drive to include everyone of 18 years and older.

Our Thalaivar gets his vaccine ???????? Let us fight and win this war against Corona virus together #ThalaivarVaccinated#TogetherWeCan#MaskOn#StayHomeStaySafepic.twitter.com/P8Gyca4zdF

Kamal Haasan, Rajinikanth's co-star of films like Moondru Mudichu, took his first vaccine shot in March. The actor-politician, who launched his own political party and contested in the Tamil Nadu Assembly election last month, attached a political message to his tweet revealing he had been vaccinated, writing in Tamil: "I took the coronavirus vaccine at Sri Ramachandra Hospital. Those who care not only for themselves but also for others should get vaccinated. Immunisation of the body immediately (and) vaccination against corruption next month. Get ready."

Like Kamal Haasan, Rajinikanth was also meant to have made his own political debut but backed out after a health scare last December which saw him hospitalized for a spell; doctors had warned against politics, he said later.

Rajinikanth, who is this year's recipient of the Dada Saheb Phalke Award, trended all of Wednesday after returning to Chennai from Hyderabad where he was filming his new project Annaatthe.