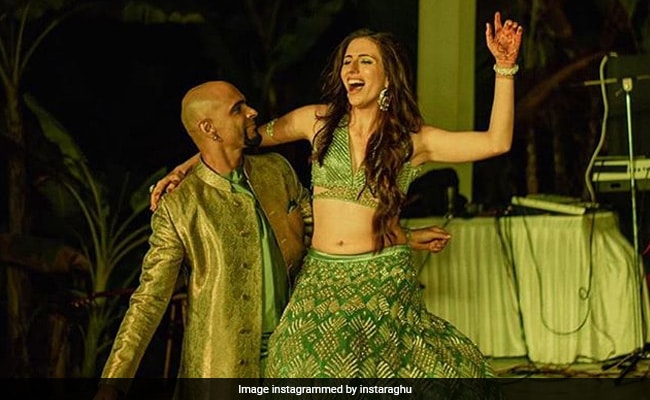 TV presenter Raghu Ram, who got married to singer Natalie Di Luccio on Wednesday, bombarded the Internet with several photos from their sangeet ceremony on Friday. The ladkiwale and ladkewale performed at the sangeet ceremony, glimpses of which were shared on Raghu Ram's Instagram timeline. A set of pictures on Raghu Ram's Instagram profile featured Natalie and her family performing at the ceremony. "The Canadians killing it desi style," Raghu Ram captioned the photos. While Natalie wore a pastel blue lehenga for the ceremony, Raghu Ram was dressed in a kurta and Jodhpuri dhoti. Raghu Ram also shared a million dollar photo featuring his brother Rajiv Lakshman, sister Supriya Nistala and close friend Rannvijay Singha, singing at the pre-wedding function. "The most beautiful and emotional moment for me! My sister, immensely talented but extremely stage shy, singing for us, while her brothers Rajiv and Rannvijay literally held her hands throughout."

The most beautiful, emotional moment for me! My sister, immensely talented but extremely stage shy, singing for us, while her brothers @rajivlakshman & @rannvijaysingha literally held her hands throughout Pics: @picsurely #Sangeet #NatRag #TuKaregiShaadi

Dance like no one's watching. Even when on stage! Haha! Pics: @picsurely #Sangeet #NatRag #TuKaregiShaadi

TV personality and actor Rannvijay Singha also shared a set of photos from the sangeet ceremony on his Instagram timeline. "The sangeet was just too much fun. Raghu Ram and Natalie Di Luccio, you two are so graceful, talented and beautiful," Rannvijay captioned the photos.

Earlier in the day, Rannvijay had shared a photo featuring himself with Raghu Ram, Rajiv Lakshman and the newlywed couple. The picture was apparently taken after the couple's Christian wedding in Goa.

An amazing wedding,an amazing couple! You guys are so #blessed and are truly made for each other!! Love you guys! @nataliediluccio @instaraghu #bestmen

Raghu and Natalie had a beach wedding, which was conducted as per south Indian rituals. Raghu Ram was dressed in a white kurta and red dhoti while Natalie looked stunning in a white silk saree with red and golden border. Raghu Ram and Natalie Di Luccio's wedding was an extremely private affair, which was attended by close friends and family members.

Raghu Ram was previously married to actress Sugandha Garg. The couple got divorced in January this year. Raghu Ram is best known for reality show Roadies.