Radhe Trailer: Salman Khan Is The "Most Wanted Bhai" Indeed

Radhe: The trailer is full of action, drama, music and dance 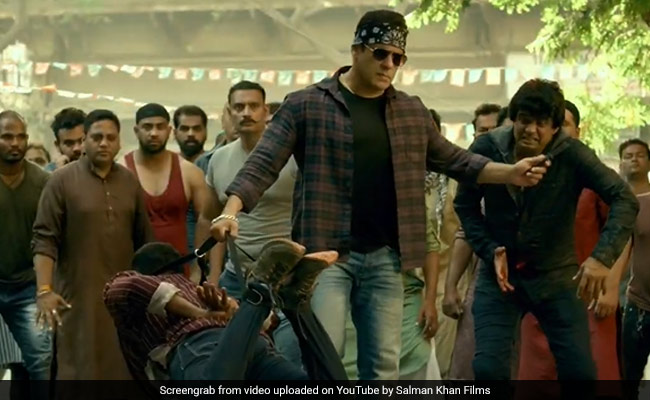 Radhe: Salman Khan in a still from the trailer. (courtesy YouTube)

The much-awaited trailer of Radhe: Your Most Wanted Bhai is here and we can't keep calm. The trailer opens with a shot of Randeep Hooda, who plays the antagonist in the film. Mumbai is in need of a new hero with its rising crime rate... Enter Radhe (Salman Khan), who is anything but a "normal police officer." Radhe, an encounter specialist, takes it upon himself to clean the city of all the goons, because "Ek baar jo maine commitment kar diya, uske baad mai khud ki bhi nahi sunta" is Radhe's motto in life and he abides by it throughout the course of the almost three-minute-long video. Away from the high-octane action sequences and catchy one-liners, Radhe falls for Dia (Disha Patani), who believes that he isn't suitable for the job of a police officer.

Not all is so smooth for Radhe as he has to deal with Dia's overprotective brother (played by Jackie Shroff). A few "seeti maar" (a song in the film) moments and Jacqueline Fernandez's blink-and-miss appearance later, Radhe gets back on track - his mission to save Mumbai.

The trailer is full of action, drama, music and dance with Salman Khan. Check it out here:

On Wednesday, Salman Khan announced that Radhe: Your Most Wanted Bhai will release in theatres and on OTT platform Zee5 simultaneously. The film is slated to release on May 13 and it will clash with John Abraham and Divya Khosla Kumar's Satyameva Jayate 2 at the box office.

Radhe is directed by Prabhu Deva. The film marks the third collaboration of Salman Khan and Prabhu Deva after hits like Wanted and Dabangg 3. The film has been backed by Salman Khan's production house Salman Khan Films.