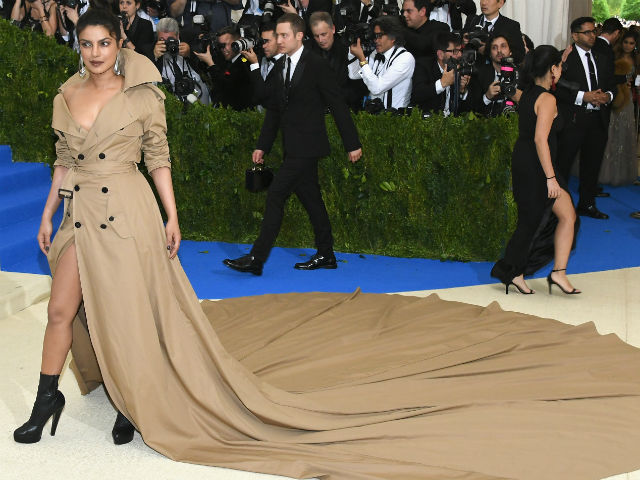 New Delhi: Priyanka Chopra redefined trench coat fashion at the Met Gala 2017 in New York on Monday and there's no question of Twitter keeping calm. The Quantico star set the red carpet on fire as she arrived at the Met Gala 2017 in a Ralph Lauren trench coat-style gown, wearing it off the shoulder and with black boots. The thigh-high slit ensured a show of toner leg. Twitter has absolutely no complaints about Priyanka's look. "I am so glad she went with the theme. And boy is she killing it! She looks gorgeous as ever," read a tweet while another delighted fan wrote: "Man, when does she not look good?" Netizens equated Priyanka's trench-coat look with that of a spy (a very stylish one, must say) turning up for a formal meet.

Twitter also offered several glimpses of Priyanka on the red carpet, revealing that she needed help to hold up the never-ending train of her trench coat gown. Twitter said Priyanka's new take on the trench coat reminded them of an uber-stylish Inspector Gadget and gaming cartoon Carmen Sandiego. For a brief while, Priyanka was accompanied by singer-songwriter Nick Jonas on the red carpet and Twitter also loved them together.

@BJTHESURFERGIRL Aye everyone except Priyanka chopra.. you seen my her guess jacket? It's like I'm here to spy and hide but also make a statement

I am so glad she went with the theme. And boyyyy is she killing it! She looks gorgeous as ever #MetGala#PriyankaChoprapic.twitter.com/ozboSBKQ7i

Thanks to twitter, I got to see Priyanka Chopra's amazing met gala look. Stunner!

BRB, just picking our jaws off the floor! @priyankachopra#PCatMetGala2017#MetGalapic.twitter.com/D5Y94yXubq

Priyanka Chopra - man, when does she not look good? #MetGala

Looking like an Indian #CarmenSanDiego@priyankachopra and I'm living for it. #MetGala

queen @priyankachopra is on her way to attend the #MetGalapic.twitter.com/y8uLoqFnGJ

Monday night, Priyanka remembered to inform folks that she wouldn't be live-tweeting the evening's episode of Quantico and moments later, she was on the red carpet, dressed to kill.

Priyanka Chopra arriving to get fitted for the Met Gala today @priyankachoprapic.twitter.com/nU18yp40Im

Promoted
Listen to the latest songs, only on JioSaavn.com
The 34-year-old actress rubbed shoulders with the likes of Rihanna, Katy Perry, Selena Gomez, Salma Hayek, Jennifer Lopez, Serena Williams and other stars at the do. This year, Priyanka also partied with the creme-de-la-creme of Hollywood at the before and after Oscar bashes. She turned heads in the Oscar red carpet in a silver ensemble from the Ralph and Russo studios.

Priyanka Chopra is currently in New York to promote her Hollywood debut Baywatch, which releases in the US in May and arrives in India on June 2. Priyanka co-stars with Dwayne 'The Rock' Johnson in the big screen adaptation of the iconic 90s show, that also has cameos by Baywatch originals David Hasselhof and Pamela Anderson.