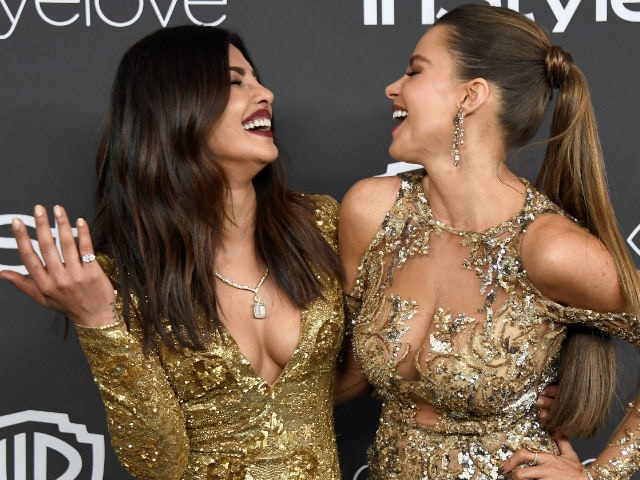 New Delhi: Priyanka Chopra's plus one at the Golden Globes after party hosted by InStyle magazine was the hilarious Sofia Vergara and, together, they made an entrance to match. Both actresses were letting their hair down after having presented at the Golden Globes - a fairly stressful event, we imagine. Priyanka, shimmering in gold Ralph Lauren, handed out the award for Best TV actor - Drama (to Billy Bob Thornton) and Sofia introduced this year's Misses Golden Globes - Sylvester Stallone's three daughters. Having acquitted themselves with top marks, Priyanka and Sofia headed to the party and stepped out of the elevator at the party venue like this:

You kill us, Priyanka and Sofia.

At the party, Priyanka Chopra hung out with a bunch of other famous people. Blake Lively and the night's Best Supporting Actress winner Viola Davis:

Promoted
Listen to the latest songs, only on JioSaavn.com
Priyanka Chopra, 34, had two reasons to be at the Golden Globes - she is the star of ABC show Quantico and also plays the antagonist in the upcoming Baywatch movie. She was witness to actress Meryl Streep's now viral speech which ripped into POTUS-in-waiting Donald Trump, a searing attack on his divisive election campaign and xenophobic agenda. Ms Streep was speaking after receiving this year's Cecil B DeMille award which honours an actor for lifetime achievement. After the Globes, Priyanka posted a picture of herself with Ms Streep and quoted from her speech:

Quoting my favourite #MerylStreep, as I call an end to this night...when you have a broken heart...make art. You are astounding! #FanGirl

Priyanka, ever busy, has been on vacation this last month, spending New Year's Eve in Goa before flying out to USA for the Globes. She will now resume filming Quantico and will prep for the release of Baywatch, the second trailer of which released today. Baywatch, which co-stars Dwayne 'The Rock' Johnson, Zac Efron and Alexandra Daddario, is the film version of the iconic Nineties' TV series and is scheduled for May release.