Prabhas Watched Kantara For The "Second Time": "What An Extraordinary Experience It Has Been"

Kannada film Kantara will release in Telugu on October 15 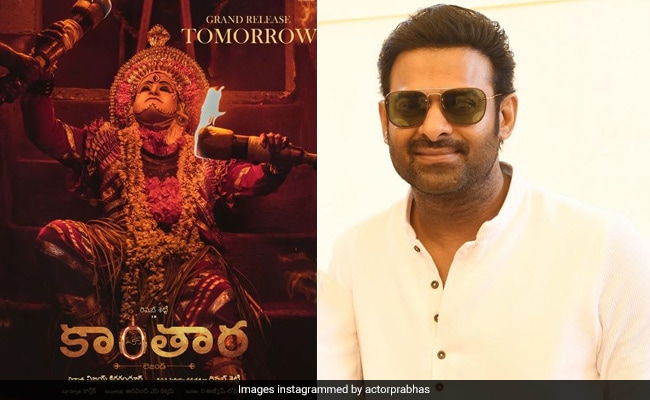 Kannada film Kantarahas been doing wonders at the Karnataka box office. The film, directed by Rishab Shetty, has been garnering praises from all quarters. Many actors including Dhanush and Rana Daggubati praised the film and its makers on their respective social media handles. The latest one to join the list is superstar Prabhas. The Baahubali actor on Friday revealed that he watched the film not just once but twice. Sharing a poster of the film, which is all set to release in the Telugu language on October 15, the actor wrote, "Watched Kantara for the second time and what an extraordinary experience it has been! Great concept and a thrilling climax. A must-watch film in theatres!"

Earlier today, praising the film, Dhanush on Twitter congratulated the team and called it "mind-blowing."

Kantara .. Mind blowing !! A must watch .. Rishab Shetty , you should be very proud of yourself. Congratulations hombale films .. keep pushing the boundaries. A big hug to all the actors and technicians of the film. God bless

Kannada's @shetty_rishab and @hombalefilms are on 🔥🔥🔥 what an extraordinary film #Kantara is!! Congratulations to each and everyone who was part of the film! @shetty_rishab truly inspired!!🙏 pic.twitter.com/ypZcsMLeCh

Rishab Shetty's Kantara is backed by Hombale productions, which will also back Prabhas' upcoming film Salaar, directed by the KGF fame Prashanth Neel.

Kantara, which has become the highest-rated Indian film on IMDb with a rating of 9.5 out of 10, released in Hindi on October 14.

The film originally released in Kannada on September 30.

On the work front, other than Salaar, Prabhas will also be seen in Om Raut's Adipurush, also starring Kriti Sanon, Saif Ali Khan and Sunny Singh in the lead roles. The film is set to release in theaters on January 12 next year.