Mentally, Pooja Hegde Is On A White Sand Beach, Having Sorbet

It’s a throwback from one of her beach holidays 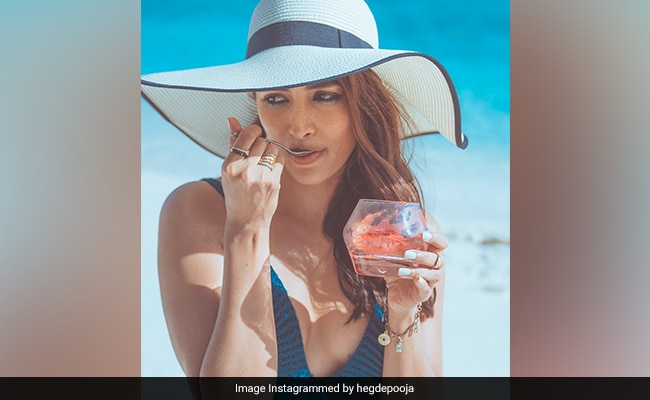 Pooja Hegde's latest Instagram post is all things relatable. It's a throwback from one of her beach holidays. And, according to her, she is “mentally having a sorbet on a white sand beach.” FYI: This is what she wrote in her caption. In the pictures, Pooja Hegde, dressed in a blue number, is relishing every bit of her sorbet. We can relate to you, Pooja Hegde. Actor Abhimanyu has dropped a fire emoji under the pic. For those who don't know, Abhimanyu's mother Bhagyashree and Pooja Hegde were co-stars in Radhe Shyam.

Didn't we say Pooja Hegde tries to keep it real on social media? And, pictures and videos from her Cannes debut are proof. She gave major princess vibes in that flowy gown. In the caption, she poured her heart out.  “If the dream is big enough, the “how” doesn't matter. The universe will make it happen. Cannes 2022,” she wrote.

Now, take a look at Pooja Hegde and the sunset view at Cannes 2022.

Pooja Hegde will be next seen in Ranveer Singh's Cirkus. The film, directed by Rohit Shetty, also stars Jacqueline Fernandez and Varun Sharma in pivotal roles.  As per the official synopsis, the spotlight is on a circus operator and his gymnast friends belonging to a big circus company “juggle”. Along with the film's poster, Pooja Hegde wrote, “It's going to be one mad ride.” The film is scheduled for a Christmas release.

Pooja Hegde was last seen alongside Vijay in Beast. The film was directed by  Nelson Dilipkumar. K. Selvaraghavan was also part of the project. She played the role of Preeti in the film. She was also part of Radhe Shyam. The film features Prabhas in the lead role. The Radha Krishna Kumar directorial was released on March 11.