In the photo, Pinkie Roshan looks pretty in a traditional outfit 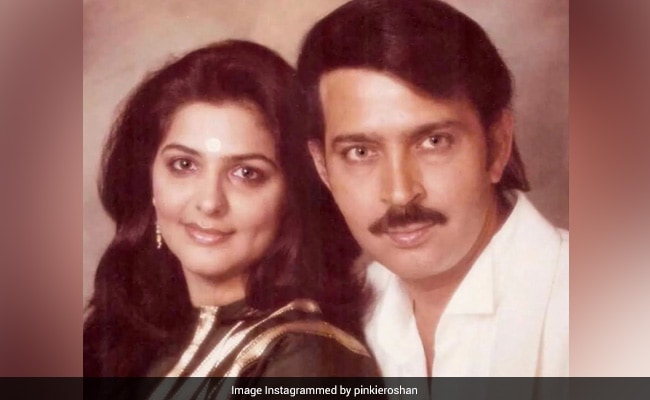 Filmmaker Rakesh Roshan's wife Pinkie Roshan shared a million-dollar throwback picture of themselves on Wednesday but it was his comment that stole the show on Instagram. The photo was clicked in the UK, as per Pinkie Roshan's caption. It is from the time when Rakesh Roshan, who now sports a bald look, had good hair. In the picture, a much younger version of Pinkie Roshan can be seen posing with husband Rakesh Roshan for the camera. "Once upon a time in UK," she wrote in the caption and in no time, Rakesh Roshan dropped this hilarious comment: "I use to carry a comb." ROFL.

Pinkie Roshan often shares adorable photos of herself and Rakesh Roshan. Earlier this year, she Instagrammed this cute photo of themselves having a whole lot of fun in a pool and wrote: "My partner for life, be proud to call me your wife." Take a look:

Rakesh Roshan is known for directing movies like Khudgarz, Khoon Bhari Maang, Kishen Kanhaiya, Karan Arjun, Kaho Naa... Pyaar Hai, Koi... Mil Gaya and the Krrish film series. He is also a producer and a screenwriter. Rakesh Roshan has also worked in a number of films in the Seventies and Eighties such as Khel Khel Mein, Ginny Aur Johnny, Priyatama, Dhongee and Haathkadi.

His son Hrithik Roshan has starred in many of his films like Kaho Naa... Pyaar Hai, Koi... Mil Gaya and Krrish. Hrithik has also worked in movies such as Dhoom 2, Jodha Akbar, Zindagi Na Milegi Dobara, Guzaarish, Agneepath and War.