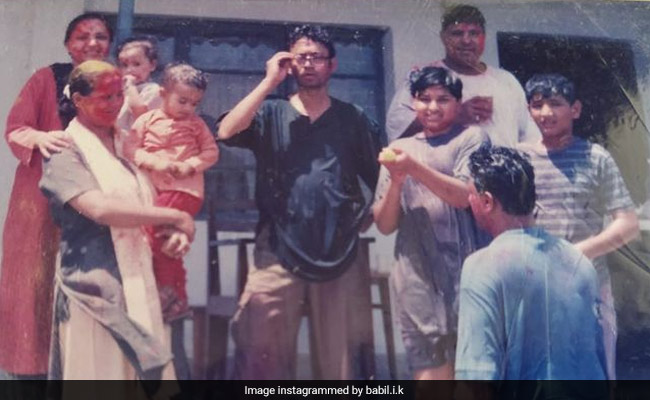 Late actor Irrfan Khan's son Babil Khan, on Saturday, shared two unseen pictures from his childhood days, featuring him and his father. The throwback pictures that Babil shared on Instagram are from the time when Irrfan Khan and his family celebrated the festival of Holi at filmmaker Tigmanshu Dhulia's house. The pictures also feature Irrfan Khan's wife Sutapa Sikdar and Tigmanshu Dhulia's daughter Jaansi Dhulia. The pictures are from the time when both Babil and Jaansi were toddlers. One of the pictures feature Irrfan Khan and Tigmanshu Dhulia drenched in Holi colours as they look at little Babil. The other one is a group picture featuring Irrfan, Sutapa, Tigmanshu, Babil, Jaansi and their relatives. Sharing the pictures on Instagram, Babil wrote: "I remember the best holi celebrations of my life at Jaansi's house."

Babil Khan's post received many comments from the fans of his late father. While some asked him to post more pictures of Irrfan Khan, others simply appreciated the pictures that he posted. "HOWW ADORABLE," a fan commented on the post.

Babil Khan keeps sharing some of his cherished memories of his father with his fans on social media. Earlier this month, he had dropped a picture of Irrfan Khan from his younger days. He complemented the picture with a long emotional caption.

On Irrfan Khan's death anniversary, Babil had shared a picture of Irrfan Khan from the times when he was on chemotherapy for his cancer treatment. He wrote a touching note in the caption of the post and said that no one "can ever replace" his father.

Irrfan Khan died of cancer on April 29 last year. He was 53. Irrfan Khan was a prolific actor with a number of successful films to his credit. Some of his best known and critically acclaimed films include Paan Singh Tomar , Hindi Medium , Maqbool, Piku and The Lunchbox . His last film was Homi Adajania's Angrezi Medium which was released last year on OTT platform Disney Plus Hotstar.

Alia Bhatt "Shines" Bright Like The Sun In This Vacation Pic