Pic: The One With Shahid Kapoor And Ishaan Khatter's 'Ultimate Photobomb' Moment

Ishaan Khatter's post cracked the Internet up and how 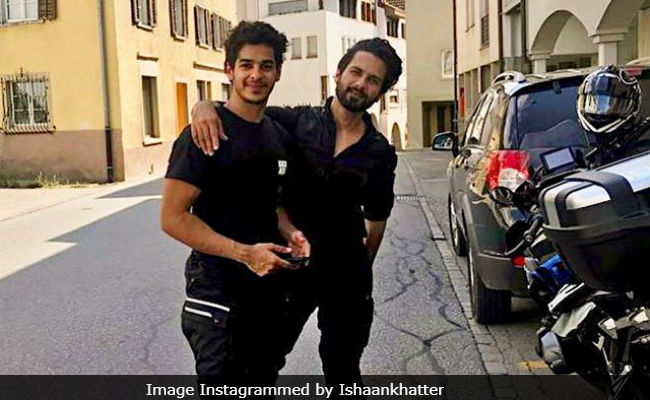 Raksha Bandhan might be over but Shahid Kapoor and Ishaan Khatter continue to give us major sibling goals. How, you ask? Well, on Friday Ishaan Khatter posted several envy-inducing pictures along with his "bhaijaan" (Ishaan's words) on his Instagram profile. The Dhadak actor posted a series of pictures along with his crew and what followed suit was an "ultimate photobomb" moment. In one the pictures, Shahid and Ishaan could be seen posing with their biker crew. In another picture, the squad was photobombed by a car. Sharing the post on his Instagram profile, Ishaan Khatter wrote: "Bhaijaan (Swipe right for the crew, swipe again for the ultimate photobomb)."

Ishaan Khatter and Shahid Kapoor were on a bike trip. The brother duo was joined by Kunal Kemmu and other friends. Shahid Kapoor, who referred to his squad as the "biker boys" shared severa pictures from the getaway on his Instagram profile. Here are some pictures from Shahid Kapoor's motorcycle diaries:

On the work front, Shahid Kapoor was last seen in Sandeep Reddy Vanga's Kabir Singh, which is a remake of the popular Telugu film Arjun Reddy. The film performed exceptionally well at the box office. As of now, the actor hasn't announced any upcoming project.

Meanwhile, Shahid's brother Ishaan Khatter was last seen in the 2018 Shashank Khaitan-directed drama Dhadak, co-starring Janhvi Kapoor. The actor will next be seen in Mira Nair's film A Suitable Boy, which is an adaptation of Vikram Seth's novel.