Pic From Amitabh Bachchan's Look Test For 1971 Film. He "Actually Got Selected" 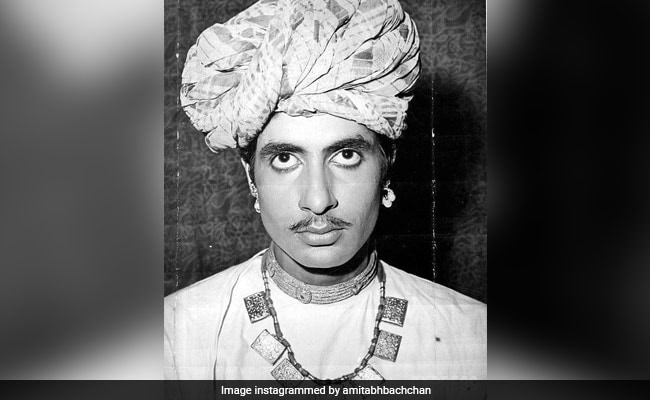 Amitabh Bachchan, on Sunday, shared a picture from his look test for his 1971 film Reshma Aur Shera. The 78-year-old actor played the role of Sunil Dutt's character Shera's brother in the film. Reshma Aur Shera, produced and directed by late actor-filmmaker Sunil Dutt, featured him and Waheeda Rehman in the lead roles alongside Vinod Khanna, Amitabh Bachchan, Raakhee, Ranjeet, and Amrish Puri. The film was set against the backdrop of Rajasthan. In the photo that Amitabh Bachchan shared, he can be seen sporting a traditional Rajasthani outfit comprising a pagari (turban), a kurta, studs and a neckpiece.

The picture was clicked during Amitabh Bachchan's look test for his character Chotu in 1969. "My look test for film 'Reshma Aur Shera'... 1969 ... I actually got selected!" wrote Big B in the caption.

Amitabh Bachchan frequently shares stills or posters of his old films. Last month, Big B shared a still from his 1981 film Naseeb and wrote: "The matador and the gun... film NASEEB... climax on a rotating Restaurant, a set built at Chandivali Studio and it rotated... so action scenes, drama, Restaurant on fire, all done while it rotated. Only the great Manmohan Desai could conceive all this... and succeed... and we're talking the 80's...no VFX no CG nothing... Those were the days my friend."

Meanwhile, take a look at Amitabh Bachchan's photo from his 1975 film Deewaar.

Big B was last seen in Shoojit Sircar's Gulabo Sitabo, in which he co-starred with Ayushmann Khurrana. The film released on Prime Video last year. Amitabh Bachchan has Chehre with Emraan Hashmi, Brahmastra with Nagarjuna, Ranbir Kapoor and Alia Bhatt, Mayday with Ajay Devgn and Jhund lined-up.