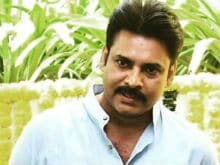 Chennai: The shooting of actor Pawan Kalyan's next yet-untitled Telugu film with director Trivikram will commence from next month. The project, which marks the third collaboration between the actor and director, will be a two-heroine subject.

On Saturday, the film was officially launched in Hyderabad.

"The shoot will start from next month. It will be an 85-crore entertainer featuring two heroines, and the makers have already begun the casting process," a source from the film's unit told IANS.

After delivering two blockbusters Jalsa and Attarintiki Daredi, Trivikram and Pawan Kalyan have teamed up for this project.

The film, which will be produced by S Radha Krishna, marks the debut of composer Anirudh Ravichander in Telugu film industry.

Cinematographer Manikandan, who has worked on projects such as Anniyan and Prem Ratan Dhan Payo, has been roped in to crank the camera.

With the launch of this project, Pawan currently has three projects in his kitty, and out of which two are remakes of Tamil films Veeramand Vedalama.

Promoted
Listen to the latest songs, only on JioSaavn.com
"Trivikrama's project is not a remake. It's an original script and it was exclusively written for Pawan Kalyan," the source added.