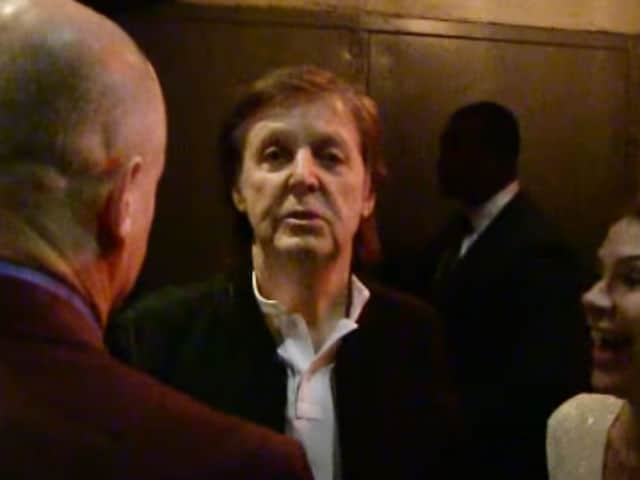 Paul McCartney in a still from the video. (Image Courtesy: YouTube)

New Delhi: Tyga, where will you put your face now? International site TMZ has accessed video footage of Sir Paul McCartney apparently being turned away from the rapper's after-Grammy party. "How VIP do we gotta get," Macca is heard asking in the video - more VIP than one of the only two surviving Beatles, it seems.

Macca, 73, wasn't the only biggie in the group, which included Beck and Foo Fighters' drummer Taylor Hawkins. They are filmed being apparently rejected at the door of Los Angeles' Argyle club and then climbing into a waiting car, which appears to contain Sir Paul's wife Nancy Shevell.

A case of Hello Goodbye, is what it looks like:


Strange days indeed, to borrow a phrase from Sir Paul's fellow Beatle John Lennon. Tyga, 26 but surely old enough to have heard of The Beatles, has claimed on Twitter that he wasn't to blame:

Why would I deny @PaulMcCartney stop it. He's a legend

I don't control the door. I had no knowledge SIR PAUL was there. I just performed and left.

For those who don't know, Tyga is a rapper known for the hits Still Got It, Faded and Far Away. He's also known for dating Kim Kardashian's sister Kylie Jenner, a romance that allegedly began when she was 16 and under-age, causing controversy.

In an update to the story, TMZ reports that a rep for Argyle claims that Macca's posse were actually trying to get to Mark Ronson's party and were simply redirected to the correct venue.(Also Read: RIP David Bowie: Jagger, McCartney, Madonna Pay Tribute to 'True Original')