Parineeti Chopra, Mesmerised By The Everest, Gets A "Lesson In Humility"

The two have shared posts that clearly define their admiration for the hills. 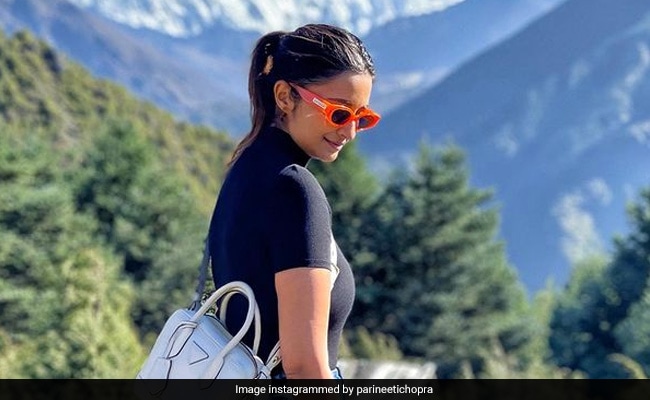 Parineeti Chopra is dazed by the brilliance of the Himalayas. We aren't making guesses. The actress herself wrote about her amazement. Parineeti posted a set of photos on Instagram, where she stands and stares at the majestic Mt Everest in the distance. We see the mountain ranges and the highest peak in the world shining bright behind the other hills. Parineeti turns about and shows us her smiling face. The pics would have been enough to show how amazed she is by the view. But Parineeti added more charm to this post with her caption that went like this, "Good morning, Mr Everest. You gave me a lesson in humility today." Here is her post:

Parineeti Chopra is currently shooting for the film Uunchai directed by Sooraj Barjatya. She isn't the only one in the crew who has been touched by the beauty of the mountains. Anupam Kher, who is also part of the star cast, is also "humbled" by the view of the Himalayas. The actor also dropped a bunch of pictures on Instagram. There, he is seen facing away from the camera towards Mt Everest. Anupam Kher wrote, "Humbled by the majestic Mount Everest. Aap log bhi darshan kar lo [Take a look at this view]."

Here, Parineeti Chopra and Anupam Kher share the frame where both of them turn their backs to the camera and contemplate Mt Everest. Parineeti posted the photo on Twitter.

Here's another snap of Parineeti Chopra chatting over the phone. We see the clouds and trees behind her while she turns her left profile towards the camera. "Chatting from 8,000 feet," she wrote.

Earlier, Parineeti Chopra announced that she is a part of Sooraj Barjatya's Uunchai with a series of photos featuring herself and Sooraj Barjatya from Nepal. In the album, we see the hills rising behind them and the green sprawling around them. Parineeti wrote that she was "thrilled and honoured" to be part of the project. Here is her post: