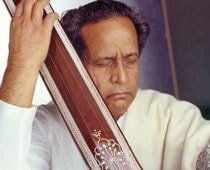 The last of the titans of Hindustani classical music, Pandit Bhimsen Joshi was a rare genius who could transcend the mundane and transport his audience to the sublime with his gifted voice that captured both anguish and ecstasy.

What made him arguably the most popular Hindustani music vocalist of the current times was his impassionedrenditions with a powerful and penetrating voice that showcased the aesthetic majesty of the 'Kirana' gharana of which he was the celebrated exponent, as also the eloquent expression of light classical, devotional and the popular variety.

It was an awe-inspiring fusion of intelligence and passion that perhaps separated Pandit Bhimsen Joshi from other classical vocalists who dogmatically stuck to their 'Gharana' culture with a rigidity that possibly inhibited creativity.

Born on February 4, 1922 at Gadag in Dharwad district of Karnataka, his journey to the stardom in the world of Hindustani music was just as dramatic as it was arduous for one who decided to run away from home at a tender age of 11, in quest of finding a 'Guru' to learn music.

Even as a child, Pandit Bhimsen Joshi's craving for music was evident to his family as he managed to lay his hands on a 'tanpura' used by his 'Kirtankar' grandfather, which had been kept away from his gaze at home. Music had such a magnetic pull over him that a 'bhajan singing' procession or just 'azaan' from a nearby mosque was said to draw him out of house.

On his way back home after school hours, Pandit Bhimsen Joshi used to stand near a shop selling gramophone records and listen to the music played by the owner for prospective customers.

There he chanced to hear a record of Abdul Karim Khan and resolved to sing like the Ustad. The quest for the Guru started at that point, as Pandit Bhimsen Joshi himself told a biographer in an interview.

A slight provocation at home spurred Pandit Bhimsen Joshi to give effect to what had been brewing in his mind as he made his way to Gadag railway station, clad in a rumpled shirt and half pant, and embarked on a ticket-less train journey that took him to Bijapur where he sang 'bhajans' earning a pittance to feed himself.

Unable to find the master who could teach him, the intrepid youngster then wanted to go to Gwalior on advice by a music loving person but a mix-up of train landed him in Pune, the seat of Maharashtra culture.

Pandit Bhimsen Joshi was in for a disappointment in pursuit of a Guru once again when eminent vocalist Krishnarao Phulambrikar, whom he approached for tutelage, insisted on a monthly fee that was beyond the means of the boy, whose parents by then had lodged a complaint with Gadag police after his disappearance from home.

Disappointed but not demoralised, Pandit Bhimsen Joshi left Pune for Mumbai and journeyed from place to place to finally reach Gwalior, his original destination and an acknowledged centre of Hindustani music.

With the help of sarod maestro Hafiz Ali Khan, who was under the patronage of the Maharaja of Gwalior, the young Pandit Bhimsen Joshi joined the Madhav Sangeet Vidyalaya, a leading music institution in those days. His basics in 'khayal', the singing form that originated in Gwalior, were learnt during this period as he grasped the technical aspects of the 'gayaki'.

Not content with the lessons at the Vidyalaya, Joshi again met Hafiz Ali Khan and persuaded the Ustad to teach him subtler points of difference between ragas 'Marwa' and 'Puriya', the two classical melodies that remained his forte and a rage with his audiences.

With his passion for learning finer nuances of music undying and on advice from one of the teachers at the'Vidyalaya', Pandit Bhimsen Joshi left Gwalior for Bengal where he became a student of Bhishmadev Chatterjee who taught him raga 'Gandhar'.

After a brief stint with Chatterjee, who could not find enough time to teach his pupil due to a busy schedule,Pandit Bhimsen Joshi then went to Jalandhar, another leading centre of Hindustani music and the venue of an annual jalsa, music festival, that offered a platform for artistes from all over the country and listened to their music plentifully.

In Jalandhar, Pandit Bhimsen Joshi took another pursuit side by side, which was rigorous physical exercises and acquired a strong physique which held him in good stead for vigorous riyaz throughout his life.

A chance meeting with Vinayakrao Patwardhan, a scholar musician, at one of the Jalsas, prompted Pandit Bhimsen Joshi to go back to his home town as he advised the young artiste to approach Sawai Gandharva --- eminent exponent of Kirana gharana ----at Kundgol and seek his discipleship.

Sawai Gandharva -a leading disciple of Abdul Karim Khan--- subjected Joshi to a gruelling regime to test his urge and determination to learn music.

A strict disciplinarian, the guru (Sawai Gandharva) is said to have hurled a nut-cracker at the shishya (Pandit Bhimsen Joshi ) when he slipped rather badly on a note-pattern.

Sawai Gandharva taught 'Todi', 'Multani', and 'Puriya' ragas to Pandit Bhimsen Joshi as it was his considered view that the mastery over these ragas was not only basic to the cultivation of a steady and tuneful voice, but also helped significantly in improving its volume, depth and range.

Pandit Bhimsen Joshi's shagiridi (tutelage) lasted five years during which he also accompanied his guru on his concert tours. He soon began giving mini-concerts in Dharwad, Sangli, Miraj and Kurundwad and among the music lovers who attended them was Mallikarjun Mansur, who was to later emerge as one of the great vocalists in the country.

His horizons widened and his wanderlust grew as he started going places visiting musical centres and gave apublic concert in Mumbai which was a great success.

But it was a concert in Pune in January 1946 on the occasion of the 60th birthday of his guru that gave Pandit Bhimsen Joshi a real break, catapulting him to fame as he cast a hypnotic spell on his listeners.

He never looked back after this concert and was flooded with invitations from leading musical institutions inprominent places from all over the country. A classicist by training, and temperament, Pandit Bhimsen Joshi soon evolved an approach that sought to achieve a balance between what may be termed as "traditional values and mass-culture tastes" as he went on to have supposedly the largest commercially recorded repertoire in Hindustani vocal music.

What distinguished him from the ordinary was his powerful voice, amazing breath control, fine musical sensibility and unwavering grasp of the fundamentals that made him the supreme Hindustani vocalist, representing a subtle fusion of intelligence and passion that imparted life and excitement to his music.

In the forays he made outside the classical fold, Pandit Bhimsen Joshi lent is voice as a "dhrupad" singer for a Bengali film based on the life of Tansen and later sang as a playback singer for Marathi film Gulacha Ganapati, produced and directed by celebrated Marathi humorist Pu La Deshpande in addition to Hindi movies Basant Bahar and Bhairavi.

But it was his 'Sant Vani' recitals, which bore the flair of Marathi 'Bhakti Sangeet' that added immensely to hispopularity in both Maharashtra and Karnataka which have had a long succession of saint-poets.

The appeal of Pandit Bhimsen Joshi's classical music transcended Indian borders as M. Louis, a Dutch film producer and director who happened to listen to his raga Todi at an International film festival in Vancouver, produced a film on his music in India and exhibited it to the West.

Canadian business tycoon James Beveridge, who was deeply interested in Indian classical music, came all he way to Pune to shoot a 20-minute documentary on him which was titled Raga Miyan Malhar. Back home, it was renowned director Gulzar who made a 45-minute documentary on the life and career of the maestro in 1993 which won the national award for the best documentary film.

A man of many parts, car driving was a passion for Pandit Bhimsen Joshi , who was also an expert swimmer, a keen enthusiast of yoga and a football player in his younger days. He had acknowledged his weakness for alcohol but left it in 1979 after it started affecting his career.

Be it sobriety or inebriation, the popularity and magnetism of this genius never ever faded.

A biographer once said of him, "Here indeed is a man who has loved and lived his life with all its romance and intensity with a complete identification with his music..".

Promoted
Listen to the latest songs, only on JioSaavn.com
In real life, he was simple, transparent, forthright, andunobtrusive". Panditji's public performances had dwindled in the last few years owing to the age factor. But everybody was infor a pleasant surprise when during the 2007 "Sawai Gandharva" festival---- the annual event which he himself had started in memory of his guru---- the maestro appeared on the stage on a wheel chair with an irresistible urge to sing beore an avid audience that treasured the moment, which subsequently turned out to be his last public engagement.

The 'Bharat Ratna", the highest award of the land, bestowed on him in 2008 was nothing but a tribute paid by agrateful nation to a genius called Pandit Bhimsen Joshi, whose melodious exploration of Hindustani classical music enriched lives of a multitude of connoisseurs as well as the common man who doted upon the artistic grandeur of his colossal voice.