Paava Kadhaigal Review: The actors are in prime form and the abridged narrative format gives them, and the directors, the scope to create sharply chiselled, dire, disconcerting portraits of putrid patriarchy. 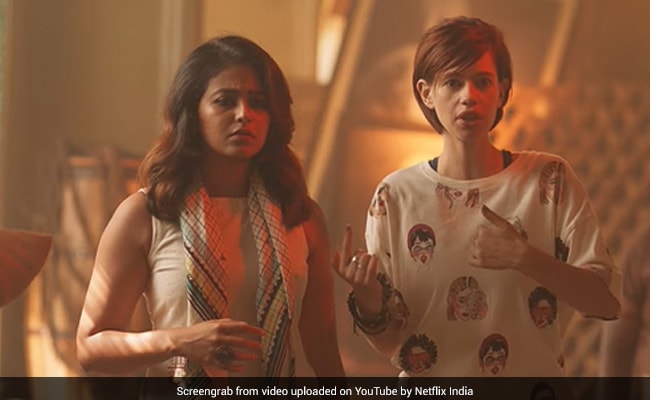 Paava Kadhaigal Review: A still from the anthology. (courtesy YouTube)

The idea of the family as a safe space is hurled out the window in Paava Kadhaigal, a Netflix anthology of four disquieting Tamil short films that tell hard-to-watch but compelling stories in which obsession with honour trumps humanity and free will with chilling impunity. The actors are in prime form and the abridged narrative format gives them, and the directors, the scope to create sharply chiselled, dire, disconcerting portraits of putrid patriarchy.

This quartet of powerful, classily crafted tales from Tamil Nadu, produced by Ronnie Screwvala's RSVP and Ashi Dua Sara's Flying Unicorn Entertainment, centre on violence of the most reprehensible kind, acts perpetrated on the vulnerable - and the trusting - not by hardened criminals but by patriarchs or their underlings swayed by deeply ingrained, phony notions of pride and prestige that, like the present-day love jihad narrative, should have no place in the 21st century.

Indeed, the first of the four films, Sudha Kongara's Thangam (My Precious), is set in the last millennium. It forays into a village in Covai district of four decades ago, where a transgender man dreams of starting a new life, away from the indignities continually heaped upon him. The only person he shares his innermost feelings with is a childhood friend he hopes to marry after the gender reassignment surgery that he is saving up for.

In Vignesh Shivan's Love Panna Uttranum (Let Them Love), a politician's twin daughters decide to seek their father's blessings for their choice of life partners. The girls surmise that he is a father after all and no longer the unbending man that he once was. They obviously do not know him well enough.

The first story looks at the resilience of the protagonist Sathaar, played with restraint by Kalidas Jayaram. It is easy to arouse sympathy for an individual who is treated with disdain because of the way he is, not the least by his own parents, and yet never loses his sense of dignity, especially in his relationship with Saravanan (Shanthnu Bhagyaraj), a childhood friend. Superficial empathy isn't all that Thangam seeks. It digs deeper.

Kongara favours a storytelling style that tilts towards straightforward melodrama from the point that Saravanan seeks Sathaar's assistance to convey his affections for his sister Sahira (Bhavani Sre). But, as the story nears its climax, she alters the narrative perspective in a startling way to reveal Sathaar's eventual fate. This allows the director (she has co-written the screenplay with Shan Karuppusamy and Ganeshaa) to spring an unsettling surprise or two.

One of the most striking aspects of Thangam is its subversion of the idea of masculinity through the person of Saravanan. He is an ideal man - he is educated and good-looking. He has a job in the city to boot. He is sensitive, too. He is perfectly comfortable in the company of Sathaar and does not shy away from shedding a tear to articulate pain and remorse.

Pitch-black humour pervades Shivan's film about the politician Veerasimman (Padam Kumar) to whom "caste, creed, community and honour" matter more than anything else. While he 'actively' supports inter-caste marriages purely for image-building purposes, his hatchet man Narikuttan (Jaffer Sadiq) is at hand to ensure that community sensitivities aren't hurt.

Anjali plays the sisters Aadhilakshmi and Jothilakshmi, who have drifted apart. On learning that daddy dearest has accepted the boy Aadhi is love with, Jothi drives to her father's home with friend Penelope (Kalki Koechlin) and a rapper from Mumbai, Bad Boy Bharani "B-Cube" (Tony Sebastian), to check on her sibling. But what the visitors run into out there leaves them with little room for manoeuvre.

At the outset of the third film, Vaanmagal (Daughter of the Skies), written and directed by Gautham Vasudev Menon, the mood shifts ever so slightly only to retreat back into the dark alleys of the mind. A traumatic incident disrupts the lives of Mathi (Simran) and Satya (Gautham Vasudev Menon), a couple who have been married for 27 years and have a son and two daughters.

Vaanmagal features several incidents of violence, one of them only contemplated and not followed through with, and all of them stem from the static mindsets that determine conservative responses to women and their place in society. The mother, played brilliantly by Simran, is the repository of the family's core values that, as she herself says, are borne by the women.

The father, on the other hand, is wracked by guilt and helplessness, which manifests itself in behaviour that he explains away in a manner that is facile but not difficult to grasp. He is the protector who has failed in his role. The other male member of the family, the first-born, seethes with rage.

"This is your body. Only you have rights over it," Mathi says to her elder daughter Vaidehi (Sathanya) the day she attains puberty. The younger Ponnuthaayi (Angelina Abraham), only 12 years old, pleads with the mother that she too be given the ritual bath her elder sister receives on reaching adulthood.

The violence in the three films simmers under the surface and, when it does erupt, it occurs mostly place off-screen. But in the fourth and last segment of Paava Kadhaigal, Vetri Maaran's Oor Iravu (That Night), it plays out in all its horror in front of the camera.

Estranged from her family for two years because she married a man outside her caste, the pregnant Sumathi (Sai Pallavi), returns to her parental home because her contrite father Janakiraman (Prakash Raj) wants to have a baby shower for his one-time favourite daughter.

Unlike the mother in Thangam, who is as exasperated as her husband is with her 'son', Sumathi's mother isn't as upset with the prodigal daughter as Janakiraman. Her problem is, given the kind of family she is a part of, she does not have much of a say.

The theme of patriarchy, with all its toxicity, binds the four films together. That Paava Kadhaigal is also inevitably about caste and gender is established by the opening credits (they flow on an animation segment that shows a girl from birth all the way to the stage in her life when a boy offers her a rose as a token of his love.

Both the rose and the love that the fragrant flower represents are ephemeral, a fact denoted by the disintegration of the petals by the time the name of the director appears on the screen. For good measure, the music that accompanies the introductory credits is composed by the twenty-something 'Gaana Girl' R. Sivatmikha.

Look at how the girls fare in Paava Kadhaigal. Sathaar has four sisters, the politician's twins are two girls, three of the Oor Iravu patriarch's offspring are girls and Mathi and Satya, too, have two young daughters, one of whom aspires to be another Kalpana Chawla. But none of them have the wings that can enable them to soar.

Paava Kadhaigal is numerically dominated by women, a fact that serves to underscore the reality of gender discrimination. It isn't number but power that matters. The girls have little agency despite the fact that a few of them seem independent enough. Sumathi of Oor Iravu in particular has made a success of her life - her father admires her for the job she has, the swanky apartment she lives in, and the car she drives.

No matter who they are, they are all at the mercy of a society that ruthlessly imposes its class, caste and gender rules and stops at nothing to crush perceived rebellion and intimidate people who attempt to break the mould.

Somewhere along the way, a woman and a man, both rebels in their own right, stir things up a bit in the Love Panna Uttranum politician's village. But, then, both exist outside of the society that these four films portray - the woman is White, the guy is a rapper who delights in cocking a snook at authority. The girls and the transitioning man of Paava Kadhaigal do not have that option.