"A Body Exhausted, In Pain And Hurting": Vijay Deverakonda Shares The Reality Behind These Pics

Vijay Deverakonda shared a black and white image of himself with the inspiring note. 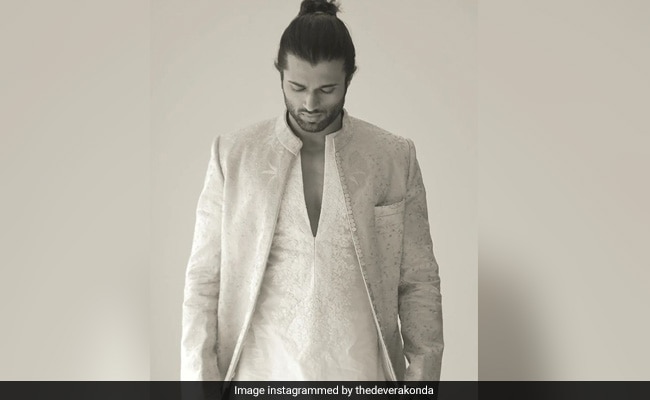 Vijay Deverakonda is a national heartthrob and there are no two ways about it. The only thing that comes close to his charisma on-screen, is his candour off-screen. A cursory glance at Vijay Deverakonda's social media handles will show you that the actor is as real as it gets. From pictures of the actor chilling with his family to his love for food, it is evident that there is no room for pretence in his world. Now, in a short but poignant note, the actor has spoken about the work and dedication that goes behind keeping him on top of the game and in tune with his craft.

Sharing a black and white image of himself in an ethnic ensemble, Vijay Deverakonda said, “Behind the pretty clothes is a body exhausted, in pain, hurting, cramping and bruised.” But working hard seems to be the only option for the Telugu star. He wrote, “Behind the face you see, is ambition, dreams and a fire that keep pushing me forward! Work. Work Hard. Outwork everybody.”

The actor recently announced that he is now the proud owner of a multiplex named after him. The Asian Vijay Deverakonda Cinemas multiplex is located in Mahbubnagar, Telangana.

Sharing the news,  Vijay Deverakonda wrote, “From dreaming of becoming an actor to now owning my own multiplex cinema. I share with you all, Asian Vijay Deverakonda cinemas. The first AVD will officially open in Mahbubnagar from September 24th 2021.”

Listen to him speaking about it here:

Previously, Vijay Deverakonda shared another image expressing just how much he loved his work. Sharing a still of himself dubbing at home, the actor wrote, “Our boy is back. Work from home. Let's get things moving.”

Posts about work can be found in plenty on the actor's timeline. In a picture where the actor is posing in a bathtub, he wrote, “Wake up. Work. Succeed. ‘Silence the lambs'.”

“Your man's back to work,” reads the caption of another set of photos of Vijay Deverakonda travelling for a shoot.

Vijay Deverakonda is known for his work in several noted Telugu films such as Yevade Subramanyam, Pelli Choopuli, Geetha Govindam, Taxiwaala, NOTA, Dear Comrade and World Famous Lover. However, it was Sandeep Reddy Vanga's Arjun Reddy that catapulted the actor to superstardom. He will be seen next in the multilingual film Liger with Ananya Panday.