Oscars 2017: The ROFL History Of How Jimmy Kimmel And Matt Damon Pretend To Hate Each Other 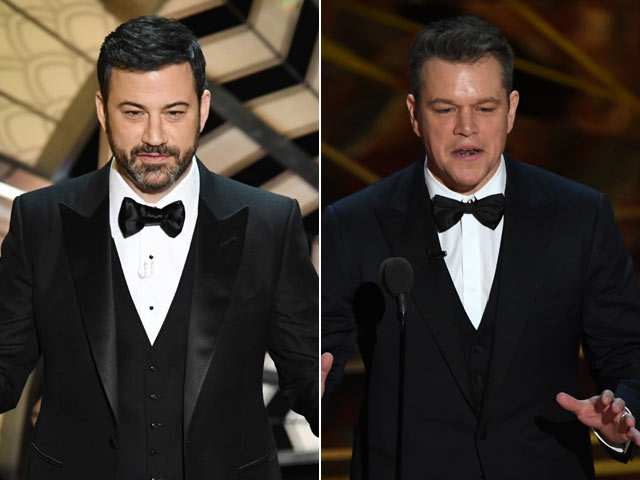 Washington: At the Academy Awards Sunday night, host Jimmy Kimmel paid tribute to his favourite prank target: Matt Damon. In a sketch, Kimmel screened Matt's 2011 family-friendly movie We Bought a Zoo, marveling that Matt "has almost no discernible talent, but he works." Back in the Dolby Theatre, Matt joined his childhood friend Ben Affleck on stage to present the award for best original screenplay. But the announcer told the audience to welcome "two-time Academy Award-winner Ben Affleck and guest." This was a continuation of a longstanding but completely fake feud between Matt and Jimmy, who eventually schemed to play his frenemy off of the stage. "I'm just presenting. You can't play me off!" Matt said as the camera flashed to Jimmy gleefully conducting the orchestra. The constant bickering was one of the highlights of the broadcast -- before all of the drama of the ceremony was usurped by an epic best picture mix-up.

Just how far back does this fake fight go? As it turns out, quite a ways. In 2011, Matt explained the origins of the joke to Parade. He wasn't even in on it initially. In fact, he had no idea what was going on. All he knew was that Kimmel had been saying, "My apologies to Matt Damon, we ran out of time" for the better part of a year. In 2006, when Damon was finally invited to be a guest on Jimmy Kimmel Live, he asked the host about the gag. Here's Matt explaining their offscreen conversation:

"And he was like, 'You want to know what happened? I was doing a particularly lame show; I think my guests were a ventriloquist and a guy in a monkey suit. We were wrapping it up, and there was a smattering of applause in the audience. I was having kind of a low moment, and I just said, 'My apologies to Matt Damon; we ran out of time.' My producer was right off camera and he doubled over laughing. It was just gallows humor. Nobody else got the joke. But it made us laugh, so we started doing it every night. I have no idea why I said you; it could have been anybody.'"

On that fateful evening in 2006, Jimmy welcomed Matt with a drawn-out introduction that left little room for an actual interview. "Matt Damon, everybody!" he eventually said as the audience cheered. "They love you and it's so good to have you here. Unfortunately, we are totally out of time."

"I'm sorry, Matt," he added. "Can you come back tomorrow night?" "Go f-- yourself," Matt replied. The two then staged a screaming match, with Matt marching off the set.

The faux feud took a heightened turn in 2008 when Jimmy Kimmel hosted then-girlfriend Sarah Silverman on his show. After a long, convoluted intro that included discussion of her thick, black arm hair, Silverman revealed that she had a surprise. She threw to a clip of her half-heartedly strumming a guitar.

Then Matt appeared. "She's f--ing Matt Damon!" he said with a wide grin. They proceeded to tell Kimmel, through song, about all the places and instances in which they did the deed. The video is, uh, really something to behold. Especially just after the 4:00 mark.

In one episode in 2013, Matt took over Jimmy Kimmel Live. The real host, taped to a chair with his tie in his mouth, looked on helplessly as Matt introduced himself as "the opposite of Jimmy Kimmel" and welcomed Silverman, no longer dating Jimmy, to the show. "I was wondering if you could just describe your relationship with Jimmy for me," he said. Silverman sighed before comparing poor Kimmel to the hot dogs sold on the side of New York City streets.

As he was on Oscar night, Ben is often in on the joke. Last year, he went to extremes to bring Matt onto Jimmy Kimmel Live, carrying him in under a very large trench coat.

And just a few weeks ago, Matt appeared in a sketch with Jimmy and his wife, Molly McNearney, who is expecting their second child. The joke here was that the baby might actually be Damon's child. Damon and Kimmel tried to hash things out on a spoof episode of "Maury," with Martin Short playing the daytime talk show host, who has an affinity for paternity tests.

Last week, Jimmy appeared on Ellen, where he talked about getting ready to host the Oscars. Ellen Degeneres couldn't help but bring up Damon, who had visited the show a week earlier and lamented that Kimmel's Oscar hosting gig was "horrible for everybody."

"Was he in this chair?" Jimmy asked. "Ugh." Ellen assured him that the chair had since been wiped down.

"We don't like each other, in case you don't know the back story," Jimmy said.

The good news is: Now you do.

Oscars 2017: The One Person Who Was Vindicated By Envelope Blunder