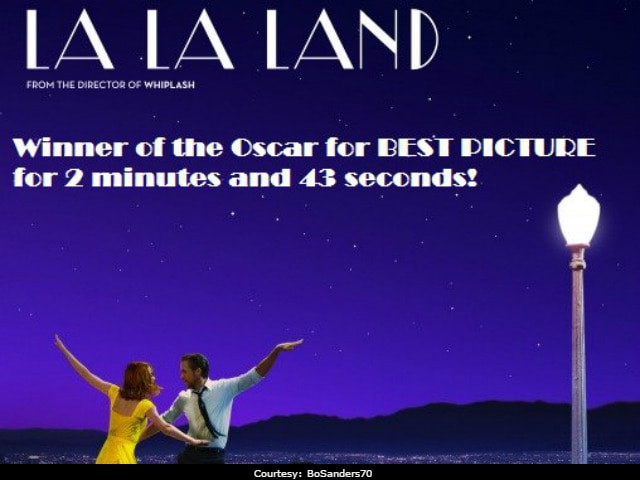 New Delhi: The big Oscar fumble was closely witnessed by social media on Monday, resulting in multiple memes and hilarious tweets, mostly featuring Ryan Gosling's and Emma Stone's La La Land. Damien Chazelle's musical might have cheered for Moonlight's Best Picture win on stage and wept silent tears backstage but there's no escaping Twitter, which is filled with hilarious tweets about La La Land's short-lived Oscar glory. The Best Picture announcement goof-up was actually a mysterious case of switched envelopes. In the climactic Oscar moment, actors Warren Beatty and his Bonny And Clyde co-star Faye Dunaway were handed the wrong envelope to read out the Best Film Oscar winner from. They announced La La Land as Best Film only to be corrected by the film's producer Jordan Horowitz some two minutes later. "Guys, guys, I'm sorry. No. There's been a mistake. Moonlight, you guys won best picture. This is not a joke," said Mr Horowitz, praised later by Moonlight director Barry Jenkins for his graceful handling of the chaos that the 89th Academy Awards were instantly plunged into.

Twitter is thrilled by the Oscar blooper and been sharing tweets that will crack you up. We have curated some for you. You're welcome.

So what happened last night?#envelopegate#Oscars#Moonlight#LaLaLandpic.twitter.com/Ev3bA6KdNY

Congrats to #MoonlightMovie#LaLaLand and all the #Oscars winners and nominees! pic.twitter.com/qN4C5ZUxJ9

me when i see pieces praising #LaLaLand's crew for being gracious instead of recognizing #Moonlight as one of the greatest films ever made: pic.twitter.com/dZXqaP76HM

Some even referred to Harry Potter and Professor Dumbledore, who often rephrased his verdicts in "light of recent events."

This is the best one. #Oscars#lalaland#Moonlight#epicfail#lol#HARRYPOTTERpic.twitter.com/0EjMjub2iK

Sometime a #photograph says a thousand words. Tonight this one of @RyanGosling was one of them. #Oscars#lalaland#BestPicturepic.twitter.com/jrZG5fgKgz

And then he did this:

"I switched the envelopes.." #Oscars2017#Oscars#moonlight#LALALAND#AcademyAwards#oscarsfail#ryangoslingpic.twitter.com/0NUkrcenxk

Promoted
Listen to the latest songs, only on JioSaavn.com
The hunt is on for Faye Dunaway, who actually read out La La Land's name from the card (the envelope contained the Best Actress' name - La La Land's Emma Stone):

While #WarrenBeatty apologized on stage, where was #FayeDunaway who was the one who actually announced #LaLaLand as the winner? pic.twitter.com/3O6VmzzGS8

La La Land won the highest number of Oscars with six wins, including Best Director for Damien Chazelle and Best Actress for Ms Stone. There was no Oscar for Ryan Gosling, nominated in the Best Actor category, the prize going to Casey Affleck for Manchester By The Sea. Moonlight went home with three Oscars, including Best Supporting Actor for Mahershala Ali and Best Adapted Screenplay.