Oscars 2018: Richa Chadha Was Ali Fazal's Plus One At After Party 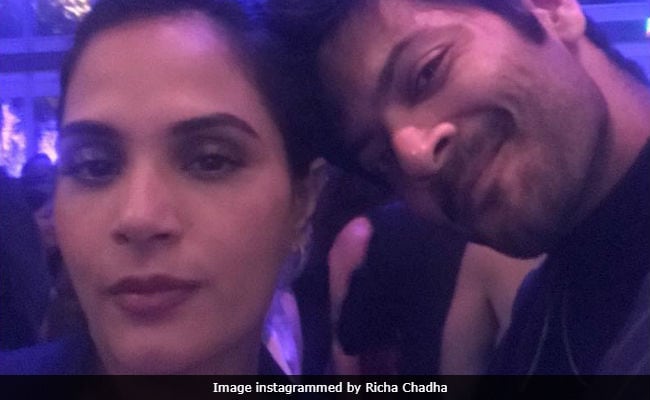 New Delhi: Fukrey co-stars Richa Chadha and Ali Fazal represented Bollywood at the Oscars 2018 after-show party held on Sunday night (Monday morning in India) after the main Oscars event in California. Richa Chadha was Ali Fazal's plus one. Richa Chadha posted a few pictures from the gala, one of which was a selfie with her 'main man' - Ali Fazal, of course. Last year, Richa and Ali made their relationship official. Richa also accompanied Ali to the various screenings of Victoria And Abdul worldwide. Victoria And Abdul, also starring Judi Dench, was nominated in Costume Design and Make-Up And Hairstyling categories. However, it lost both Oscars to Phantom Thread and Darkest Hour, respectively.

Richa chronicled their trip to the Vanity Fair party on Instagram:

Ok i swear i didnt plan this photo... hahahahahahahahah... but Jack Dawson aka Leo seems to have photobombed this selfie.. spot if you can.. but besides the little crowd, it was an honour to be present at the WME Party last night.. with greats in the room.. congratulated Mr Adrian brody on his wonderful performance in PeakyBlinders, Stared back at Drake because , arey woh richa ko taak raha thha.. toh maine bhi ghoora. And i guess the reason i was so phaila hua was because it was home territory - my agency throwing the pre oscar party last night. I think all the hip hop crowd was there fo sure. Wait, pharrel was missing .. he got to play holi elsewhere. . . . . . . #victoriaandabdul #oscars2018 #oscars #oscars90 #academy #awards #nomination #PreOscar #life #allstar #universalstudios #keanureeves #halleberry #usher #blackpanther #garyoldman #cast #newsroom #tobymaguire #spiderman #peakyblinders

Promoted
Listen to the latest songs, only on JioSaavn.com
Richa was last seen in Fukrey 2 and her upcoming projects are Daas Dev, directed by Sudhir Mishra and Arjun Mukerjee's 3 Storeys, co-starring Renuka Shahane, Pulkit Samrat and Sharman Joshi.