One And Only Keanu Reeves? Not Quite. The Internet Found A Lookalike 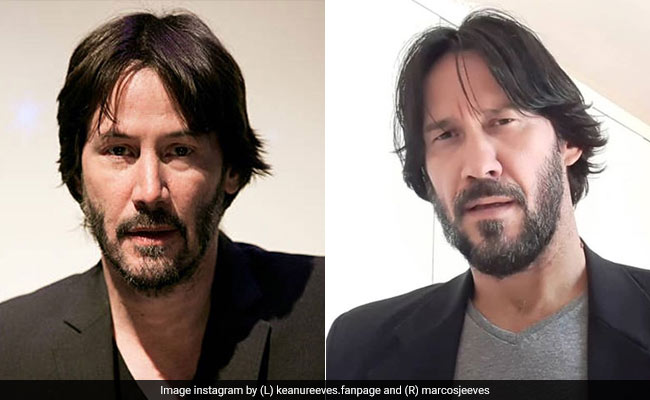 There is only one Keanu Reeves and we love him. But the Internet recently discovered his lookalike and the resemblance is absolutely uncanny. If you don't believe us, check it out for yourself. An Instagram user that goes by the name Marcos Jeeves, has been trending on social media. Inspired by the John Wick actor, Marcos has uploaded many videos on his Instagram as well as TikTok handle, in which he can be seen dressed up like Keanu. In some videos, he can also be seen mimicking the Matrix  actor's dialogues. Marcos Jeeves has over 12, 000 followers on Instagram, and his bio describes him as an actor.

Marcos' hairstyle, his dressing sense and his expressions reminded the Internet of the Matrix star. "Is that really Keanu?" asked an Instagram user. "Wow! You do look a lot like him. Now practice martial arts too," added another. "Even your names rhyme," read another comment. Check out some of the posts here, you can thank us later.

On the work front, Keanu Reeves will next be seen in Matrix 4, alongside Carrie-Anne Moss and Jada Pinkett Smith. The film will also feature Neil Patrick Harris, Yahya Abdul-Mateen II and Jonathan Groff. Meanwhile, Priyanka Chopra is also in final talks to join the cast of the action-based franchise. The Matrix released to instant acclaim and is considered to be one of the classics in sci-fi and action genres. The film that released in 1999, was followed by The Matrix Reloaded and The Matrix Revolution.

The 55-year-old actor was last seen in the 2019 film Between Two Ferns: The Movie, in a cameo appearance. He has Bill And Ted Face The Music and The SpongeBob Movie: Sponge On the Run, in the pipeline.