Here are some stunning photos from Keerthy Suresh's Onam diaries 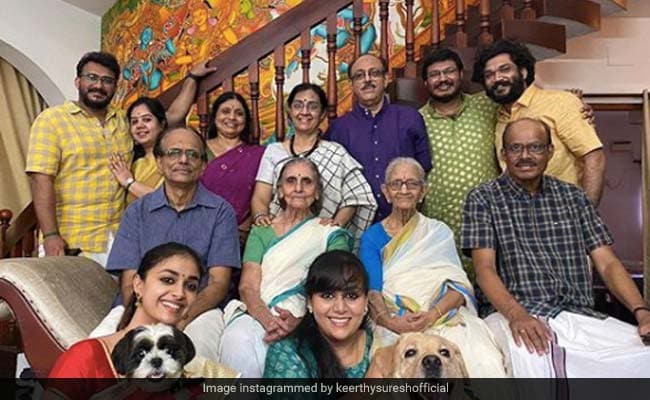 South actress Keerthy Suresh shared a few pages from her Onam celebrations on Instagram recently and her day was all about family, food and furry friends - in that order. "First comes family," the 27-year-old actress captioned a fam-jam photo, also starring her parents, her sister Revathy, along with other family members. As is tradition, Keerthy Suresh picked an off-white saree and styled it with a red blouse and traditional jewellery for this year's Onam celebrations. In her next post, Keerthy shared a glimpse of the Onam feast she enjoyed and made us really, really hungry. After her family-first caption, she wrote described her Onam menu in these words: "Then comes food."

Let's take a look at how Keerthy Suresh celebrated Onam with her family.

Keerthy Suresh reserved a post for her furry friends, who also dressed up for Onam: "From my puppers and I, to you and your family," she captioned her photos with her pet dogs.

Meanwhile, here's some major saree inspiration from Keerthy Suresh. Never an Onam without a smile," she captioned one of the photos and also dropped a few "Mandatory Onam poses!" because why not? Here are more photos from Keerthy Suresh's Onam diaries.

Keerthy Suresh is best known for starring in films such as Manmadhudu 2, Sandakozhi 2, Mahanati, Thodari and Geethaanjali, among others. She was last seen in crime thriller Penguin, which premiered on Amazon Prime earlier this year. Keerthu Suresh has an impressive line-up of upcoming films such as Good Luck Sakhi, Annaatthe and Rang De.