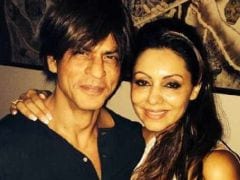 SRK turned 50 on Monday. On Sunday night, Gauri, 45, instagrammed an image of herself, SRK and their children Aryan and Suhana cutting cake:

On Monday, she followed up with a selfie of herself and SRK.

SRK and Gauri, who celebrated their 24th wedding anniversary last month, met in Delhi in 1984, and were married in 1991 after a whirlwind romance. Besides Aryan and Suhana, they are also parents to two-year-old AbRam who was born through surrogacy in May, 2013.

Shah Rukh Khan, meanwhile, has a film out in December - the much-anticipated Dilwale, co-starring his DDLJ heroine Kajol. He also has Fan and Raees out next year.