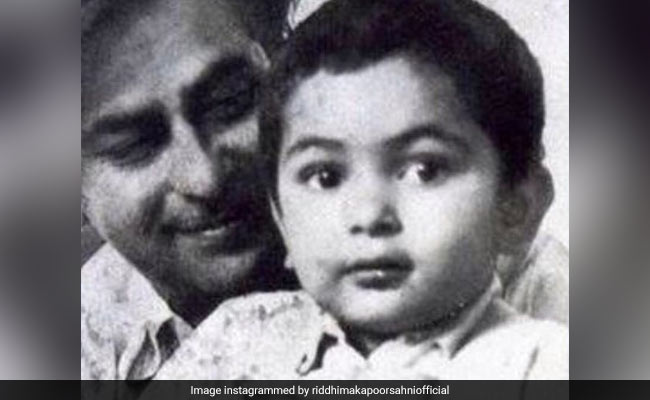 On her father Rishi Kapoor's birthday eve, the actor's daughter posted a special collage for him on her Instagram profile on Tuesday. The collage shared by Riddhima featured a few million-dollar pictures from the Mulk actor's life, right from his childhood days, to still from his debut film Mera Naam Joker and a picture from the 1973 film Bobby. The super cute pictures aside, the birthday wish also had an equally adorable caption. In her post, Riddhima addressed Rishi Kapoor as the "most special person" and she wrote: "From my heart to you Papa, to the most special person! I love you." She added the hashtags #mydaddystrongest, #birthdayeve and #lovemydad.

From my heart to you Papa, to the most special person! I love you #mydaddystrongest #birthdayeve #lovemydad

A post shared by Riddhima Kapoor Sahni (RKS) (@riddhimakapoorsahniofficial) on Sep 3, 2019 at 7:40am PDT

Rishi Kapoor, who is currently in New York for his cancer treatment, is expected to return to India soon. The actor moved there in September last year along with his actress-wife Neetu Kapoor. During his stay in the Big Apple, Riddhima frequently visited her father and shared pictures from their meet. Riddhima was accompanied by her little daughter Samara. Take a look at the pictures here:

Borsalino (Fedora/Hats in Italian) Mobsters in NY. Thank you for coming Riddhima and Samara,love you guys pic.twitter.com/PKvhAKoS43

The actor, who has been in staying in New York for almost a year now, has been actively sharing posts about missing home on his Twitter profile. During his stay in New York, Rishi Kapoor was visited by the biggest stars of the film fraternity, which includes Aamir Khan, Shah Rukh Khan and Gauri Khan, Deepika Padukone, Arjun Kapoor, Malaika Arora, Vicky Kaushal and many others. Ranbir Kapoor's rumoured girlfriend and his Brahmastra co-star Alia Bhatt also visited Rishi Kapoor, with whom she has co-starred in films like Student Of The Year and Kapoor & Sons.