On Jaya Bachchan's 70th Birthday, Warm Wishes From Sonam Kapoor And Other Stars 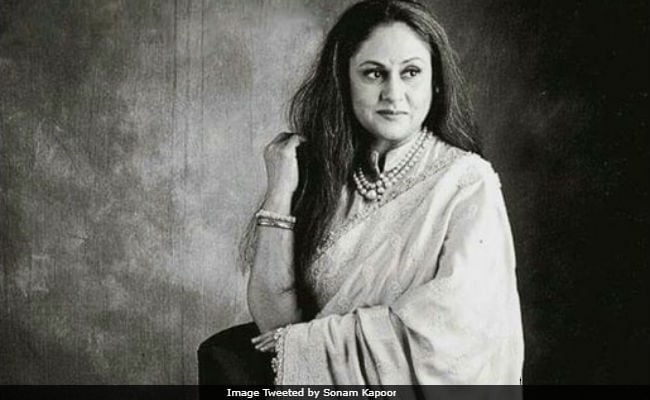 New Delhi: Actress Sonam Kapoor, Esha Deol and veteran actress Shabana Azmi sent warm wishes to Jaya Bachchan, who turned 70 today (April 9). Sonam Kapoor posted a beautiful black and white picture of Jaya Bachchan on Twitter and captioned it, "Happy birthday, Jaya aunty! Your energy and compassion are second to none and I wish you an absolutely fantastic birthday. Lots of love," while Esha Deol shared a throwback picture of them on Twitter and wrote, "Happy birthday to the most elegant, dignified and loving woman I know... "I love you like my own mother" #majorthrowback #myfirstshoot #jayabachchan." Jaya Bachchan had played Esha Deol's mother-in-law in latter's debut film Koi Mere Dil Se Poochhe.

Here's what Sonam Kapoor and Esha Deol posted on Twitter:

Happy Birthday Jaya Aunty! Your energy and compassion are second to none and I wish you an absolutely fantastic birthday.
Lots of love pic.twitter.com/o6nlzXgeyU

Happy birthday to the most elegant,dignified and loving woman I know... " I love u like my own mother " #majourthrowback#myfirtshoot#jayabachchan@bachchan@juniorbachchanpic.twitter.com/QgReGKEjbG

Promoted
Listen to the latest songs, only on JioSaavn.com
The Guddi actress celebrated her birthday with husband megastar Amitabh Bachchan and children Abhishek and Shweta at the 'stroke of midnight hour.' Mr Bachchan penned a heartfelt blog, which read, "At the stroke of the midnight hour the greetings and wishes and calls and the feeding of sweetmeats; the gifting of love and togetherness and the welcoming of the lady on her 70th...!! She be wife and Mmther... and she be with her 'progress report.' Feelings and love delivered... writings of occasion hand written on card... the gratitude of the special day and spending the time with all about, reminiscing. Quiet... still and intimate... the best way to bring in a remembrance and the passage of time over the year gone by." Big B also shared a picture of Ms Bachchan being sandwiched between their children.

Mr and Mrs Bachchan have been featured together in more than 11 films including Abhimaan, Sholay, Mili, Silsila and Zanjeer. They were last seen together in 2016 film Ki & Ka headlined by Kareena Kapoor and Arjun Kapoor.