On Instagram, Sushant Singh Rajput Was Passionate About Science And Space

His Instagram bio reads - "Photon in a double slit." 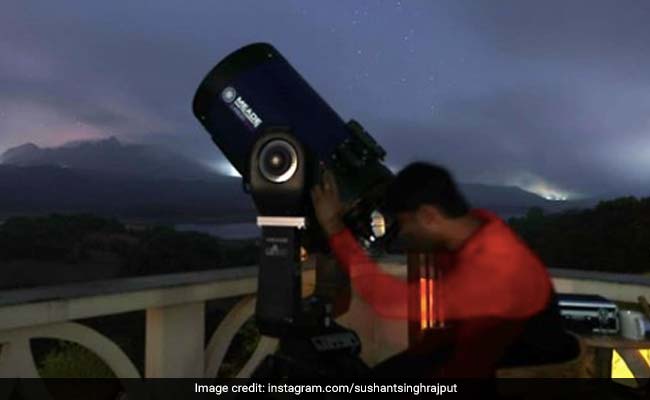 In many ways, Sushant Singh Rajput occupied a very unique space in the industry he belonged to. For one, he had several interests outside of his chosen profession, many of them of an academic bent. In two tribute posts shared after Mr Rajput was found dead at his Mumbai home on Sunday, references were made to the 34-year-old actor's scientific spirit. "He was a science buff," wrote Sushant Singh Rajput's Kai Po Che! and Kedarnath director Abhishek Kapoor, signing off his note with the words "stay interstellar." Priyanka Chopra revealed that she would miss the "conversations about astrophysics at sunrise" she had with Mr Rajput.

A short scroll through the actor's Instagram supports this. On social media, Sushant Singh Rajput was generally a man of few words; he reserved his eloquence and enthusiasm for some select subjects - among these was science. Astrophysics, to be specific. His Instagram bio reads - "Photon in a double slit." Mr Rajput spent a lot of his time looking to the stars; an engineering student before dropping out to act, he was erudite on matters of space and cosmos.

Here's a sample of the science-related posts Sushant Singh Rajput shared on Instagram. His captions are indication enough of the passion he felt.

Dark Energy that is responsible for our universe to expand at an accelerating rate forms around 68% of the universe. Dark Matter on the other hand that is responsible for the formation of our ordered galaxies in this chaos of expanse, forms around 27% of the universe. They together are two most famous and mysterious known-Unknowns that we know of. That means, if we take everything from our daily experience, everything that we know about, it's made of atoms and all of that adds up to only 5 percent of the universe. Our reality is not what actually reality seems to be.#perspectives #waysofseeing #fabricoftheuniverse #darkmatter #darkenergy

Jupiter, Saturn & Mars (top down), mirroring the Orion & so intimately hugging each other in the moonlit sky #goodmorning

All we see of one another was born in stars. In a cosmic accounting, we are 90 percent star remnants and yet out of these star stuff emerges 'life' capable of looking into the sky to perceive other stars shining. They seem distant and far but we are really close to them. How beautiful is that ? :)

When we stare at the most fundamental fabric of reality/existence, through the honest eyes of mathematics, all we see is infinity, beauty and symmetry. How immense would be the truth then, how immense would be then, that, who lives... #selfmusing #fractalGyometry #complexnumbers #juliaset #mandelbrotset #fabricofreality #selfsymmetry #iteration #life #matter #chaostheory #beautyassymmetryintruth #buddhabrot

The My Side Of The Moon #dreams

Sushant Singh Rajput also sought out new skills and learnings. He spent part of the lockdown learning how to code, citing his interest in gaming:

I love computer gaming and always wanted to learn the language behind it. So last few weeks I've been trying to learn coding and it has been an extremely exciting process to say the least and yet I'm just scratching the surface.:) A special mention to 'khan Academy' spreading a world class and free education for all, just wow !! #coding #computerprogramming #gaming #animation #love #freeEducation #quarantinethings

Astrophysicist Dr Karan Jani shared a deeper glimpse in to the actor's engagement with science:

As an actor, Sushant Singh Rajput brought the same passion with which he studied the stars to his performances in films like Chhichhore, Sonchiriya, Kedarnath, MS Dhoni: The Untold Story and Detective Byomkesh Bakshy! He was also well-known to TV audiences as the lead on the Balaji Telefilms production Pavitra Rishta.