On His "Eternal Favourite" Rishi Kapoor's Birth Anniversary, Manish Malhotra Shares A Khazana Of The Actor's Most Stylish Moments

"From his movies to his performances to his music to his clothes and style, he will always be remembered," wrote Manish Malhotra 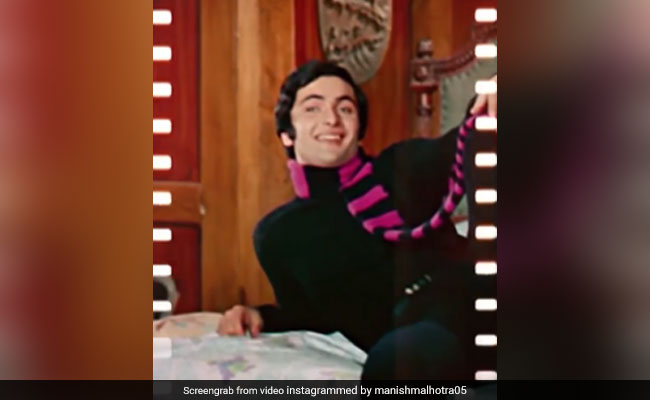 Rishi Kapoor in a still from the video. (courtesy: manishmalhotra)

Besides his acting prowess and his sense of humour, Rishi Kapoor was a man synonymous with great style. On the late actor's 68th birth anniversary, fashion designer Manish Malhotra posted a tribute in his own style. On his Instagram profile, the fashion designer posted a special video highlighting some of Rishi Kapoor's most stylish onscreen moments. Rishi Kapoor's sartorial choices were an amalgamation of experimental and subtle. Be it his never-ending love for sweaters (which he, BTW never repeated) or his Elvis Presley-inspired monochrome disco outfits, the actor made every garment look good and who would know that batter than ace designer Manish Malhotra. The video shared by him featured snippets from Bobby, Karz, Chandni and Deewana. The video ends with a note that read, "Tribute to the legendary style icon. Our eternal favourite, Rishi Kapoor."

The video is a reminder of the fact that Rishi Kapoor's style evolved with every film that he signed. Beginning with schoolboy like blazers, polka-dotted shirts with matching bow-ties, and his signature Dard-E-Dil smile. The post also features the famous sweaters and scarves made popular by Rishi Kapoor. Bonus - the red caps, turtle necks and bell-bottoms and that ultimate heartthrob himself.

Sharing the video, Manish Malhotra wrote on Instagram: "He defined his individual style to perfection ... From his movies to his performances to his music to his clothes and style, he will always be remembered. #rishikapoor #eternalstyle."

He defined his individual style to perfection .. From his movies to his performances to his music to his clothes and style. He will always be remembered #rishikapoor #eternalstyle

Rishi Kapoor died at age of 67 in a Mumbai hospital in April this year. He was diagnosed with cancer two years ago and flew to New York for treatment. Rishi Kapoor is survived by his wife Neetu Kapoor, son Ranbir and daughter Riddhima. His last project was the 2019 film The Body. The actor had also signed a project with Deepika Padukone, which was to be a remake of Anne Hathaway and Robert De Niro's The Intern.