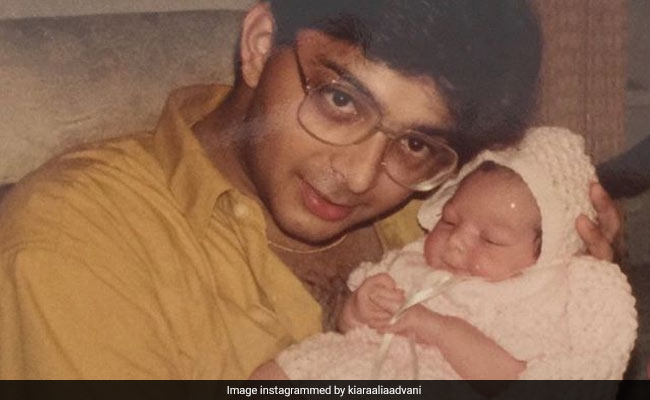 On her dad Jagdeep Advani's birthday, actress Kiara Advani made a trip down memory lane and shared beautiful memories from her childhood. The pictures of little Kiara will definitely bring a smile on your face. The actress, who was last seen in Guilty, picked three photos to post alongside her birthday note for her father. The first one is a recent photograph of Kiara and her dad while the second picture features pint-sized Kiara happily posing with her dad, mom Genevieve and brother Mishaal. The third memory is from the time when the actress was an infant. It shows Kiara's father holding her in his hands while posing for the camera.

Sharing the pictures, Kiara wished her dad like this: "He's always got my back and I've always got his. #daddysgirlforever. Happy birthday, Papa!" She also added a heart emoticon in her caption. Take a look:

He's always got my back and I've always got his #daddysgirlforever Happy Birthday papa!

Kiara Advani has been filling her throwback album with many adorable videos and pictures from her childhood. We loved the post she shared on Sibling's Day for her brother. Take a look:

Kiara Advani made her debut in Bollywood with the 2014 film Fugly. However, her breakout film was 2016's MS Dhoni: The Untold Story, in which she co-starred with late actor Sushant Singh Rajput. She has also featured in films like Bharat Ane Nenu, Vinaya Vidheya Rama, Machine and Good Newwz, to name a few. She was last seen in Netflix's Guilty. Kiara has several projects lined-up, including Laxmmi Bomb with Akshay Kumar, with whom she has worked in Good Newwz, Bhool Bhulaiyaa 2 (opposite Kartik Aaryan) and Indoo Ki Jawani.