"We are feeling so loved," wrote Alaina Scott 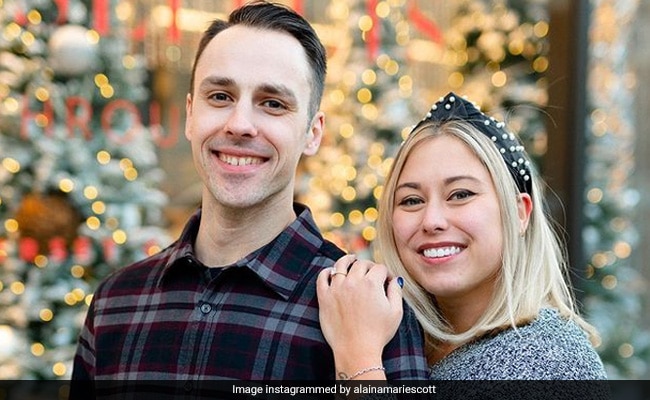 Rapper Eminem's daughter Alaina Scott is now engaged to her long-time boyfriend Matt Moeller. Alaina, who is Eminem's eldest daughter, announced her engagement on social media on Monday and shared a new set of pictures with her fiancé Matt on Thursday. "Still on cloud nine... thank you for all the well wishes, we are feeling so loved," she captioned the mushy photos with Matt Moeller, in which she can be seen flaunting her engagement ring. On Monday, Alaina Scott shared a couple of pictures of Matt Moeller proposing to her on one knee on the rooftop of The Monarch Club in Detroit, Michigan and wrote: "This moment. this life, yes a hundred times over. I LOVE YOU."

Alaina Scott and Matt Moeller dated for over seven years before getting engaged. Her unverified Instagram page is filled with loved-up pictures of herself and Matt Moeller. In November, she shared this photo and wrote: "Love you more" for Matt.

On their anniversary earlier this year, Alaina wrote: "While my love for you has somehow grown over these last 7 years, one thing has remained the same - you are my favorite person. You are my best friend, the best fur dad, and the best partner. Thank you for loving me as effortlessly as you do. Happy anniversary, ILY."

Alaina Scott is the daughter of Eminem's ex-wife Kim Scott's twin sister Dawn. He adopted Alaina and made the revelation in an interview with Rolling Stone in 2004.