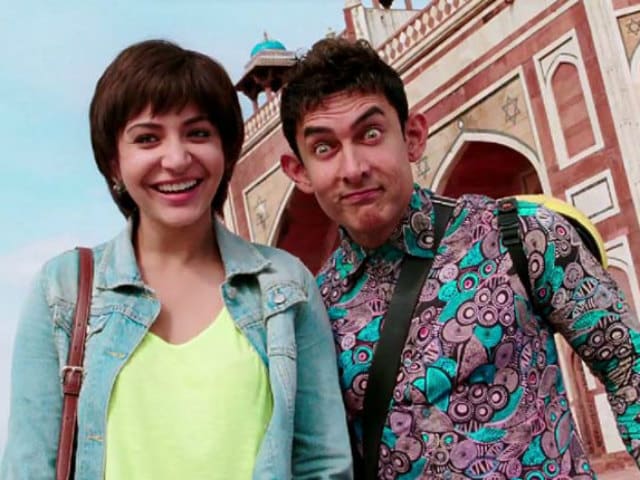 Aamir Khan and Anushka Sharma in a still from PK

New Delhi: Aamir Khan, you should know, you might have had a ghost visitor at your birthday party last night. Anushka Sharma, who is now better known as Shashi, the ghost bride of her upcoming film Phillauri, wished her PK co-star with a hilarious picture late on Tuesday night. It was Aamir's 52nd birthday on Tuesday, when a secret about Aamir's character was revealed by Anushka...umm... Shashi. In the 2014 blockbuster film, Aamir plays an alien, who accidentally gets stranded on Earth and develops an unconventional taste for dressing - for example a skirt paired with a shirt and a coat. Meanwhile, Shashi features in typical Punjabi attire in the trailer and songs of Phillauri. Now, almost three years later, Shashi says: "Yeh hamari matching skirt dekh rahe hain aap log? Maine hi Aamir ji ko gift ki thi! Gift se mujhe yaad aaya, Happy Birthday Aamir ji!"

Well, this is not the first time Shashi has been spotted at unexpected locations. Anushka urf Shashi says Sheila from Tees Maar Khan is actually Katrina Kaif. Yes, true, but IRL.

She was with Veeru and Jai during their famous bike ride but they did not know.

Shashi also knew about this year's Oscar blooper much before everyone else.

In an interview with news agency IANS, the 35-year-old actress said that she hopes to have portrayed a suitable representative of the world of spirits. "It was fun to play a non-living character because normally we play characters which are in the flesh and its boring to portray a living character in each film. You should keep doing a different thing. I think I've represented the ghost community well," said Anushka.

Promoted
Listen to the latest songs, only on JioSaavn.com
Anushka's Phillauri also stars Punjabi singer-actor Diljit Dosanjh, Suraj Sharma and Mehrene Kaur Pirzada in key roles. Directed by Anshai Lal, Phillauri will be co-produced by Anushka and her brother Karnesh Sharma. Phillauri is scheduled to hit screens on March 24.

Brahmastra Director Ayan Mukerji On Fan Theories: "We're Definitely Going To Use In Our Future"