Nothing To See Here, Just Shahid Kapoor And Daughter Misha Chilling At Home 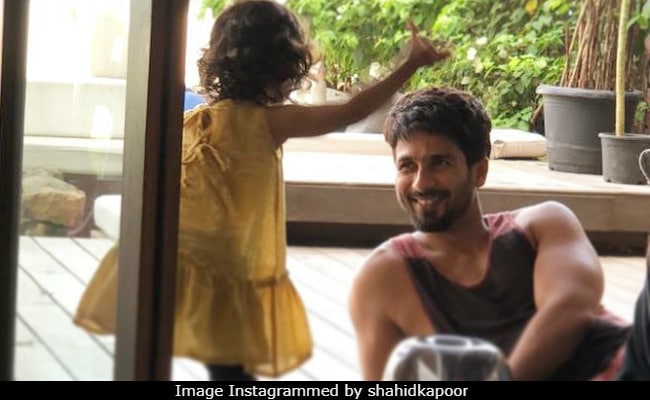 New Delhi: Another day, another cute photo of Shahid Kapoor and Misha. The Haider actor Instagrammed an adorable photo with his one-year-old daughter and Internet is a fan, already. Shared on Friday afternoon, Shahid brought along major weekend vibes with the post - this is what all of us love to do over the weekend, chill with our favourite ones. The photo is proof of what goes in the Kapoor home when busy actor and doting father Shahid Kapoor is on break from work and at home. "When you know. Nothing else matters," is how Shahid captioned the photo. Shahid's post has garnered over 1,125,769 likes in almost a day with over 4,000 comments flooding his feed.

"Why so cute?" read a comment on Shahid's photo while another one added: "Super cute pic." Here's how Shahid and Misha were chilling on a Friday afternoon.

When you know. Nothing else matters.

Posting photos with Misha is one of Shahid's favourite Instagram activities. Here's one from a Happy Sunday and another one from when Misha literally decided to fill in her dad's shoes.

Guess she has decided to take over.

Promoted
Listen to the latest songs, only on JioSaavn.com
Misha is often spotted hanging out about town with her parents - Shahid and Mira, and also frequently at the airport. Needless to say, the paparazzi is a constant fan of the little star kid and though neither Shahid or Mira appear overtly protective about shielding Misha from the media glare, they particularly do not enjoy it either. Speaking to mid-day earlier this year, this is what Shahid said: "I hate to think of all the glare that's on her. That is probably the only time I feel I should have had another job. I don't want her to deal with it. It's not good for children to go through this. They have a right to a normal childhood." Misha will turn two in August this year.

On the work front, Shahid Kapoor was last seen in Padmaavat and will soon resume shooting for Batti Gul Meter Chalu, his film with Shraddha Kapoor and Yami Gautam.