'Nothing But Love' In Virat Kohli And Anushka Sharma's 'Journey Of Life.' See Holiday Throwback

"Walking together in the journey of life with nothing but love," Virat Kohli wrote for Anushka Sharma 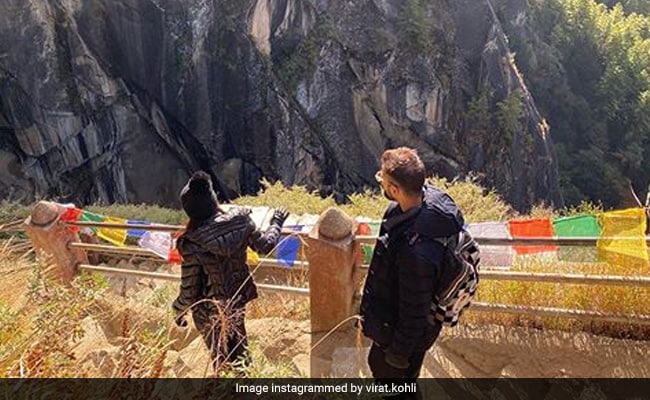 It appears that Virat Kohli is missing his recently concluded vacation in the "lap of the Himalayas" already. The cricketer dug out a photo from what appears to be a personal moment from his birthday vacation and shared it with a beautiful caption for wife Anushka Sharma. "Walking together in the journey of life with nothing but love," he wrote, tagging Anushka. Aww, how cute is that? In the photo, Virat Kohli and Anushka Sharma can be seen taking a break to enjoy the picturesque view of the green mountains that surround them as they trek downhill. Take a look at Virat Kohli's post here:

On his birthday earlier this month, Virat and Anushka left behind the hustle and bustle of city life and travelled to the mountains for a peaceful vacation. The couple filled up their respective Instagram accounts with glimpses of their holiday moments and TBH, made us very, very jealous. Virat and Anushka enjoyed breakfast in with a stunning view of the Himalayas, sipped some tea amidst nature and were thrilled when they were offered tea by a local family, who greeted them as just "two tired trekkers." The couple, who are self-confessed animal lovers, also hung out at a local farm.

When you get a chance to come close to the beauty of nature, thoughts cease and you become one with the moment and merge with the divine energy. So grateful

Today , during our 8.5 km uphill trek we stopped by a small village on a mountain to pet and feed a baby calf who was born just 4 months ago . While we did that the owner of the house asked us if we were tired and wanted to have a cup of tea ? So we went in to the home of this beautiful and warm family who had absolutely no idea who we were and yet they treated us with such warmth and love . We spent some time with them chatting and drinking tea and the whole time they just know us as two tired trekkers ! Whoever knows virat and me very closely, know that both of us live for such moments of genuine , simple & pure human connection . It fills us with such joy and peace knowing that they just wanted to be kind to two random foreigners ( plus our guide ) without seeking anything in return. If this is not the true meaning of life then i dont know what is . A memory we will cherish forever

Here's how Anushka Sharma had made Virat Kohli's birthday special while Virat's return gift to his fans for the overwhelming love he received on his birthday was like this: "What a blessing to be able to visit such divine places with my soulmate. Also thank you everyone for your kind wishes from the bottom of my heart."

This one is my blessing . My friend , My confidante , My one true love . I hope you find the light guiding your path always and may you choose to do the right thing every time . Your compassion is what makes you a good leader and i pray that you always have that in abundance . Happy Birthday my love

What a blessing to be able to visit such divine places with my soulmate. Also thank you everyone for your kind wishes from the bottom of my heart.

Anushka Sharma and Virat Kohli had a destination wedding in December 2017. On the work front, Anushka Sharma was last seen in Zero. Virat Kohli will next be leading Team Indian in the T20I series and ODI series.