No Words Needed In Vicky Kaushal's Caption For This Pic 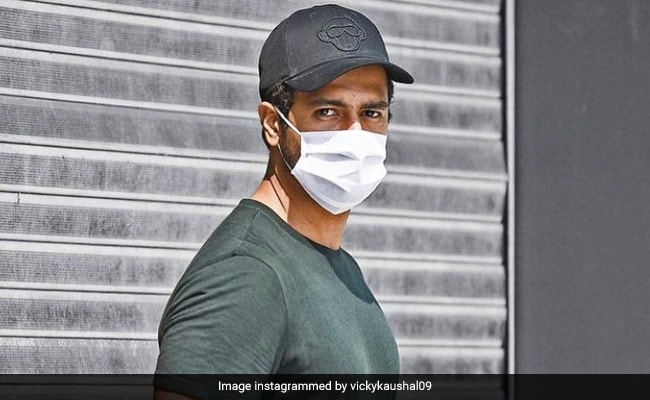 Vicky Kaushal's social media game is a class apart. Netizens drool over each of his Instagram pictures. This time, the Uri actor simply posted a snap of him heading out but not without a mask. He made the message clear enough by captioning the post with emojis of a masked face and folded hands.

Needless to say, the 32-year-old looked uber cool in casual attire. He donned a grey T-shirt paired with track pants and a cap. Celebs have often taken various ways to promote the wearing of face masks during the coronavirus pandemic.

Apart from posting some cool snaps, Vicky is also letting us into his usual day-to-day activities. From practising stunts with a stick to horse riding, Vicky is doing all it takes to ace his future performances. The actor has a bunch of movies and one of the most awaited ones is Aditya Dhar's superhero film, The Immortal Ashwatthama.

Vicky will be seen in Sardar Udham Singh, directed by Shoojit Sircar. His look from the film was released last year.

Running my fingers thru the bullet holes at Jallianwala Baug, little did I know that 1 day I'd get a chance to bring alive the lesser known martyr, UDHAM SINGH. #SardarUdhamSingh@ShoojitSircar@ronnielahiri#SheelKumar@writish#ShubenduBhattacharya@filmsrisingsun@sardarudhampic.twitter.com/VxAfmGLYjB

The actor also has Meghna Gulzar's next Sam Manekshaw in the line up. His uncanny on-screen resemblance with Field Marshal Sam Manekshaw had left fans amazed.

Vicky will then play the role of Aurangzeb in Karan Johar's period drama Takht.