"What is the procedure to stop people from spreading rumours and fake news at a time like this?" tweeted Sonakshi Sinha 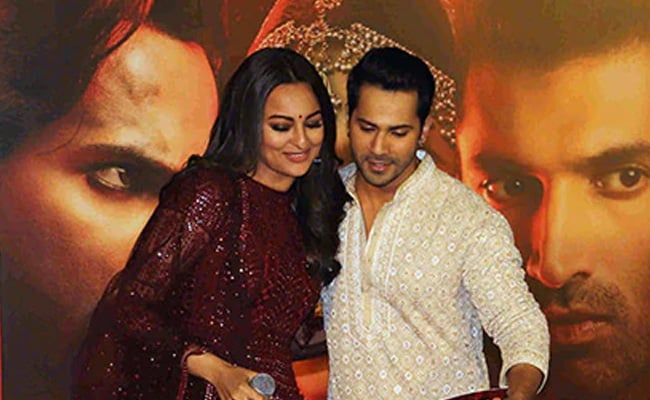 Varun Dhawan and Sonakshi Sinha during the promotions of Kalank

In the final days of the three-week lockdown, Sonakshi Sinha and Varun Dhawan found themselves mentioned in unwarranted tweets about stepping out of the house during the lockdown. The Kalank co-stars, who are known for dismissing rumours on Twitter, set the record straight with respective tweets on Monday. What irked Sonakshi was a tweet from filmmaker Vivek Agnihotri, who must have spotted an old photo of Sonakshi somewhere and tweeted it asking: "Who shoots in such times?" Replying to his tweet, Sonakshi not only pointed out that the photo is from a shoot in November last year but also slammed Mr Agnihotri for "spreading rumours".

Being a Director and member of many unions and film bodies one would expect you to be better informed that Absolutely NO one is shooting since studios are shut and its a national lockdown! I believe Classic freeze frame means throwback in @MumbaiMirror terms, https://t.co/Nrjlh6PuIHpic.twitter.com/6Z8v0S0Ahr

Excuse me @MumbaiPolice , @OfficeofUT what is the procedure to stop people from spreading rumors and fake news at a time like this? Asking for a responsible citizen, sitting at home, practicing social distancing and NOT shooting - ME pic.twitter.com/piKLznKjoo

In another tweet, she shared another photo from the November shoot and directed this message towards Mr Agnihotri: "Being a director and member of many unions and film bodies one would expect you to be better informed that absolutely no one is shooting since studios are shut and its a national lockdown!"

Meanwhile, Varun Dhawan shared a throwback photo of himself with a cop to thank the efforts of the Mumbai Police to maintain peace and discipline during the lockdown. But an "idiot" on Twitter decided to troll the actor and tweeted: "Where is social distancing, mask and gloves... Bad example set by this actor." Varun shut the troll down with a simple response full of love: "Idiot, this is old picture clicked two months back. Love you."

Idiot this is old picture clicked 2 months back love u https://t.co/K9XXKlESnm

In India, Maharashtra is among the states that have the most coronavirus cases with over 1,980 persons detected other than Delhi, Tamil Nadu, Rajasthan and Madhya Pradesh. India has over 9,150 positive cases of coronavirus. Production houses had stopped working in Mumbai weeks ahead of the lockdown was imposed.