The fun banter between the actor and director left social media in splits. 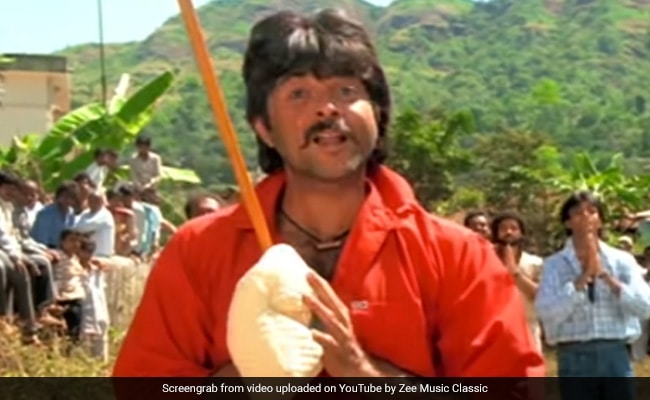 Anil Kapoor in a still from the video. (Image courtesy: YouTube)

Anil Kapoor is winning the Internet with his wit and it is all thanks to a song from his film Ram Lakhan. Remember the iconic number, “One Two Ka Four, Four Two Ka One;My Name Is Lakhan, My Name Is Lakhan” from the 1989 film. Well, the good folks of the Internet are revisiting the song once again thanks to a tweet by director Anubhav Sinha and Anil Kapoor's hilarious response to it. Anil Kapoor evoked curiosity among fans on Thursday when he posted a tweet that said, "No matter how complicated the math problem is I always know the answer.”  He also added the hashtag “watch till the end”, urging viewers to watch a video he had quote-tweeted.

No matter how complicated the math problem I always know the answer...#watchtilltheend ???? @anubhavsinhahttps://t.co/4a3wpL2Rnj

Anil was, in fact, responding to a clip, posted by Thappad director Anubhav Sinha. The tweet is aimed at deciphering what the lyrics of the song actually means.

Tagging actor Anil Kapoor, who appeared in the song and director Subhash Ghai who helmed the film, Anubhav shared what appeared to be a video on a complex mathematical equation. Sharing it, Anubhav wrote, “The code has been cracked after so many years. Anil Kapoor, please see this. Subhash Ghai.”

So what is the video all about? The clip is an explainer of sorts about the “most dangerous problem” in mathematics, “one that mathematicians are warned not to waste their time on.” The premise of the clip is based on the conjecture that any number put through the set of rules mentioned in the video will end in a 4, 2, 1 loop. And just as the voiceover is about to reveal the name of the mathematical problem, the video cuts to a clip of Anil Kapoor singing and dancing to the One, Two Ka Four chorus.

The code has been cracked after so many years. @AnilKapoor please see this. @SubhashGhai1pic.twitter.com/S5x0VBKN04

Twitter users and Bollywood fans were thoroughly entertained by the video as well as the banter between the actor and the director.

“I was literally paying attention till the last second of the video,” one user confessed.

Another said that the video left them humming the song all day.

Got this one yesterday and was humming your song all day @AnilKapoorhttps://t.co/4IwtALsAzM

“Awesome,” read one of the comments.