No Matter How Busy Life Gets, Vaani Kapoor Will Always Have Time For Pancakes. See Pic

The "work" that Vaani is talking about is perhaps prep for Abhishek Kapoor's yet untitled movie, which also stars Ayushmann Khurrana. 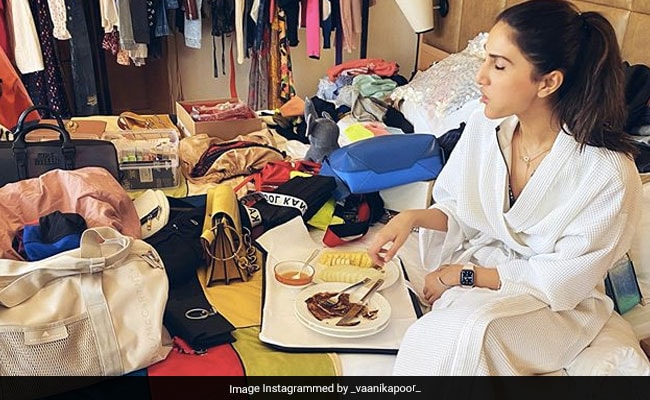 For busy star Vaani Kapoor, no matter how hectic it gets, she will always have time for pancakes. On Tuesday, Vaani shared a page out of her work diaries, offering a glimpse of her shoot life. "Work with a side of pancakes," Vaani captioned the photo, in which she can be seen savouring a plate of pancakes with her bed littered with bags and clothes. Vaani, in a lounge robe and socks, appeared to be in absolute chill mode. The "work" that Vaani is talking about is perhaps prep for Abhishek Kapoor's yet untitled movie, which also stars Ayushmann Khurrana. The director's wife Pragya Kapoor commented on Vaani's photo: "Jet set go." The film's team, including Ayushmann, are currently in Chandigarh for shoot.

work with a side of

Vaani Kapoor's love for food is very evident in some of her Instagram posts. The lockdown had brought out the inner chef in Vaani Kapoor, who baked a cake and described it as her "hidden talent" in an Instagram post.

Vaani Kapoor's "quarantine and chill" dinner also kind of looked pretty delicious. Wonder who could have made it.

Dinner for one ☝️ #quarantineandchill

Here's how some of Vaani Kapoor's mornings look like. These posts just made us work up an appetite.

In terms of work, Vaani Kapoor just flew back to Mumbai from UK, where she was filming Bell Bottom with Akshay Kumar, Huma Qureshi and Lara Dutta. Soon after her return, Vaani has busied herself with the Abhishek Kapoor film. Vaani Kapoor was last seen in War, which released last year. Apart from Bell Bottom, Vaani Kapoor's line-up of films also include period drama Shamshera.