No Longer Stuck In Second Gear: 5 Reasons To Watch The F.R.I.E.N.D.S Reunion

F.R.I.E.N.D.S - The Reunion episode is full of behind-the-scenes footage from back in the days 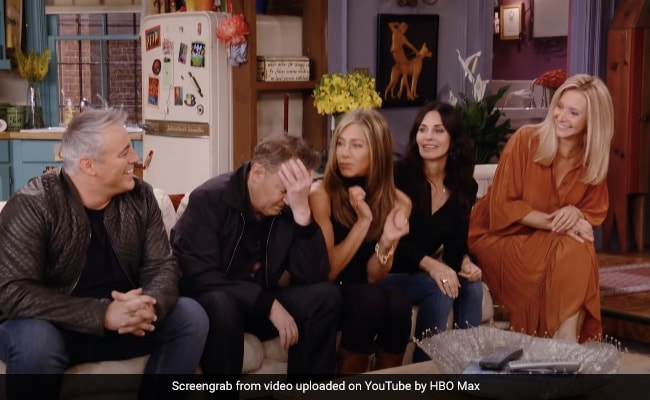 F.R.I.E.N.D.S - The Reunion is true blue nostalgia on the sets (Courtesy YouTube)

If it hasn't been your day, your week, your month or even your year, don't despair - the F.R.I.E.N.D.S reunion is streaming now and, as Chandler Bing would say, could we BE more excited? Titled The One Where They Get Back Together, the one-off special has the cast revisit the sets where the long-running TV show was filmed (hello, Central Perk). It's also packed with special guests - some of whom appeared on episodes of F.R.I.E.N.D.S. NDTV's Rohit Khilnani had the privilege of watching the reunion episode in advance and here are his (mostly) spoiler-free reasons why you should put it on your watch list - if you haven't already.

1) Nostalgia on the sets: When the show opens, all six actors walk into the sets one by one, starting with David Schwimmer, followed by Lisa Kudrow, Matt LeBlanc, Jennifer Aniston, Courteney Cox and Matthew Perry. They look at the details on the sets and discuss what's the same and what's missing. Courteney starts the conversation by pointing at the fridge and says the cookie jar which is missing is in Lisa Kudrow's house. Each actor shares what they took from the set as memorabilia. Matt and Mathew are later seen relaxing on their famous recliner chairs and chatting.

2) Archive footage and behind-the-scenes:F.R.I.E.N.D.S - The Reunion episode is full of behind-the-scenes footage from back in the days. There are takes and re-takes, which show the fun the cast had while filming the sitcom. It shows the spark between David Schwimmer and Jennifer Aniston. The actors also recall an incident when Matt LeBlanc had an accident on the sets, and Warner Bros. paramedics had to rush him to the hospital.

3) Interview and audience Q&A: The show is mainly a conversation between the six lead actors of F.R.I.E.N.D.S with James Corden. A lot of information comes out in this chat, including the one where they discuss the on-set equation between David Schwimmer and Jennifer Aniston. The audience was socially distanced and were also allowed to ask questions, and one question that started an interesting conversation was on if there was anything that they didn't enjoy about F.R.I.E.N.D.S.

4) Hear it from the creators of F.R.I.E.N.D.S: The three creators - David Crane, Marta Kauffman and Kevin S Bright are the highlight of F.R.I.E.N.D.S: The Reunion episode. From sharing information about how the idea of F.R.I.E.N.D.S came about to the show's casting and then how each episode was fleshed out, this time, they share all possible information. And while they talk about casting, we get to watch the actual videos of the actors of what other shows they were doing at that time, and that's gold.

5) Special guests: Star appearances always add so much value to an entertainment show. Here we get to see a host of them starting with Reese Witherspoon and Tom Selleck who played recurring characters in the series. Others who appear in this mega episode are David Beckham, Justin Bieber, popular K-Pop band BTS, Lady Gaga, Cara Delevingne, Elliott Gould (who played Ross and Monica's father), Mindy Kaling, Maggie Wheeler (the infamous and much adored Janice), Thomas Lennon, Malala Yousafzai, and Cindy Crawford looking like a million bucks.